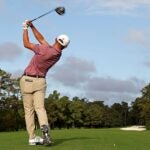 Collin Morikawa got his first look at Augusta National on Monday.

AUGUSTA, Ga. — At 8 a.m. on Masters Monday, Collin Morikawa had Augusta National to himself. He stood alone on the 1st tee, and the stillness was striking. No fans, no gallery ropes, no members noshing at the tables nearby. This was Morikawa’s first time laying eyes on Augusta National but this old soul seemed utterly unfazed. He smashed a drive down the middle, as he is wont to do, and then strode purposefully down the perfect carpet of fairway. Everything about Morikawa’s demeanor offered one message: there is work to be done.

“It’s a place you’ve kind of watched growing up,” Morikawa said following his practice round, “and to finally play 18 holes here as an actual golfer in the Masters is something special. But I’ve got to remember I’m here to play golf and I’ve got to kind of figure out how am I going to play my best. I’m so focused in on playing good golf and trying to figure out this course, because I think if I get intertwined in trying to be a spectator, I’m going to miss some shots and I’m going to miss some areas where I need to really prep and focus in. So when I’m out there, I’m really trying to enjoy it but I’m really trying to focus. That’s just me.”

Morikawa, 23, is hardly a prisoner to conventional thinking; with the shaved sides of his head he looks like an extra from a Fast & Furious flick, not a Tour pro. But it has become gospel that institutional knowledge is crucial around Augusta National. Ask Phil Mickelson, who says, “I feel I have a two- or three-shot advantage over the field before we even tee off because of all the time I’ve put in studying the golf course over the years.”

When it comes to this kind of magical thinking, Morikawa ain’t having it. “On Thursday, we all start at even par,” he says evenly. “You know, I think what’s cool about golf is that you have to adjust. My caddie, J.J. [Jakovac], could have had these lines from, whatever, five years ago, three years ago, but with wind, with rain, with where the tees might be, it’s just about adjusting and figuring out what the line might be for that day. That’s golf. So what lines do we need to figure out? I think we have that down in one day. We figured that out today.”

The greens require more study — not just how putts break but where to miss, and how to use slopes to feed the ball closer to the hole. For all the talk of Augusta National being a bomber’s paradise, it is actually the ultimate second-shot course; the last five winners have all been top 5 in strokes gained: approach.

Precision, of course, is the key to Morikawa’s game, which makes the PGA Championship winner a threat to become the first player since Fuzzy Zoeller in 1979 to win the Masters in his first try. “I’m not afraid of any course out here,” Morikawa woofs. Indeed, this rookie has a huge advantage in that he has accumulated no emotional wounds on a course that annually breaks so many hearts.

Morikawa’s first spin around Augusta National confirmed for him that now is not the time to start overcomplicating things. “I actually saw Mark O’Meara last week,” he says, “and I asked him [for advice about Augusta National], and he gave me a very basic answer, which I love: control your wedge shots and control your speed on the greens. You can say that about any course. But at the end of the day, how much of a course can you simplify it?” Morikawa is about to find out. But one day into his first Masters adventure, this young major champion already appears to have all the answers.