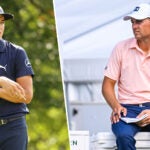 Rickie Fowler and Jordan Spieth are hoping next PGA Tour season will be more fruitful.

The the U.S. Open and the Masters looming this fall, the FedEx Cup doesn’t have the same sense of season-ending finality as usual. Still, the format gives us a simple way to categorize who has had the best seasons and who’s been off their usual form. With that in mind, it was fascinating watching the bubble boys this week at TPC Boston and seeing who advanced — and who didn’t! — to next week’s BMW Championship.

In the end, Louis Oosthuizen snagged the final spot when he snuck to No. 70 in the FedEx Cup standings with a birdie at No. 18. Doc Redman was first out at No. 71. Here are five big-name players whose Tour seasons have officially ended:

How’d he do this week? Not well. Koepka didn’t make it to the starting gate at TPC Boston, WDing midway through the week. His hip and knee seem to be recurring issues.

Season highlight: That showing in Memphis (T2 and a near-win) reintroduced Koepka to the world and showed that there are weeks he can contend on pure determination.

What’s next? Some proper recovery, hopefully. Koepka played a jam-packed schedule since the PGA Tour restart, but he never looked quite right health-wise, even in his T2 at WGC-Memphis. The U.S. Open and Masters would be much better with a healthy Brooks Koepka.

How’d he do this week? He shot 74-68 to miss the cut, although he insisted that he feels good.

Season highlight: It was pheast or phamine for Phil this year, but he did notch two top-3 finishes on Tour, a solo 3rd at Pebble Beach and a T2 at WGC-Memphis. Still, his commentary at the Match II and his broadcast cameo at the PGA Championship were likely just as memorable.

What’s next? Funny you should ask. Mickelson is actually going to tee it up tomorrow, making his debut on the PGA Tour Champions. The Charles Schwab Series at Ozarks National just got a heck of a lot juicier; this is massive for the entire tour and also means we get a little extra early-week golf action.

How’d he do this week? He had his moments, actually! Rose needed a furious rally to make the cut and keep any hopes of a playoff run alive, and he got it, making birdie three birdies in his final five holes to make the cut on the number. Then he shot 67-67, which would be enough to contend, some weeks — but only led to a T25 at this week’s birdie-friendly setup.

Season highlight: Rose’s best tournament result actually came in the first event of the PGA Tour restart when he finished T3 at Colonial. Instead of kick-starting Rose’s season, though, the event was the start of a topsy-turvy stretch that included four missed cuts in five weeks. Hardly the Justin Rose we’re used to seeing.

What’s next? Rose finished T3 at last year’s U.S. Open at Pebble Beach. Can he rekindle any of that magic for Winged Foot in September? It seems unlikely we’ll see him at the Safeway the week beforehand.

How’d he do this week? Spieth’s entire season was best summed up by his first round at the Northern Trust, where he was 3-over through eight and then played his next five holes in 6 under. With Spieth, moments of brilliance and crippling setbacks seem to come in equal parts. He wound up missing the cut by one shot.

Season highlight: Maybe back at the C.J. Cup last October, when he opened 70-65 and stayed close to contention all week. At that point, his season felt so full of promise. Instead, his T8 finish that week wound up his best of the season.

What’s next? Buddy, if you have any idea, you let me know.

How’d he do this week? He made the cut but never made much weekend noise and finished T49.

Season highlight: This was a particularly strange season for Fowler, who we’ve just gotten used to seeing contend in a whole bunch of tournaments year after year. This season, though, Fowler’s only top-10s came in a T10 at the American Express and a T5 at the Tournament of Champions. So we’ll send Rickie off the traditional Tour schedule and assume that his season highlight was getting married last fall.

What’s next? As shocking as it is to see Jordan Spieth drop to World No. 63, it’s arguably weirder to see Fowler at No. 35. I’d expect that number to improve; his game is just too solid not to. Even during a season of shaky play Fowler was still better than Tour average in basically every facet of the game. Contention is sure to follow.

You can see the last five in and first five out below.