10 surprising winners from WGC-Memphis: Who REALLY had the best week? 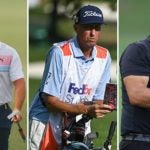 To the actual winner go the actual spoils, and while Justin Thomas certainly falls under the title of “winner” I don’t think we could describe his position atop the leaderboard at this week’s WGC-FedEx St. Jude Invitational as “surprising.” I’m not here to lie to you, dear readers, which is why we’ll tip our cap to JT at the outset here and move on to 10 people, places and ideas whose weekend wins in Memphis were less tangible — but no less real. Here are two handfuls’-worth of surprising winners.

It’s easy to crown the caddie of the winning player a big-time winner in his own right. Whatever percentage Thomas’ fill-in caddie Bones Mackay worked out before the week started, we’re guessing it was a satisfying chunk of the $1.82 million first prize. But let’s dig deeper:

To my knowledge, Bones Mackay had never caddied in the same group as Phil Mickelson without caddying for Phil Mickelson. To my knowledge, he’d also never won during his first week as a fill-in caddie. With the win on Thomas’ bag, Mackay even improved upon his fill-in solo 3rd on the bag of Matthew Fitzpatrick at the Memorial — and at long last he looped for a golfer who reached world No. 1 (a summit Mickelson never conquered, but Thomas did when world rankings were finalized Sunday night). All in, that’s a heck of a week for Mackay.

2. Phil Mickelson (and his shades!)

Yeah, I can’t believe Lefty is still wearing those mirror-style aviators, either. But they seem pretty effective at blocking out the doubters, who Mickelson seems to accumulate during middling stretches like this, only to rub a finish like Sunday’s T2 in their face. I mean, T2! At a World Golf Championship!

Sure, Mickelson’s former caddie and his temporary boss took home the big-time hardware, but the 50-year-old posted a bogey-free final round replete with characteristic insane up-and-downs and reminded us that you still can’t quite count out Philly Mick. The key to Mickelson’s week was the same as its been for years: he drove the ball in play. If he’s middle-of-the-pack or better in driving accuracy, Lefty is still a force to be reckoned with.

In summary, a guy who was thinking about teeing it up in this week’s PGA Tour Champions event is instead back inside the world’s top 50. That’s a move.

At one point on Friday, Tom Lewis was 5 over par and 15 shots off the lead. At one point on Sunday, Tom Lewis had a four-foot putt to take the outright lead. In between, he shot a Saturday course-record round of 61 (three better than anyone else that day) and stormed out with a 5-under 30 on the opening nine on Sunday. He ended up in the large group at T2.

For a guy who has, by my count, never logged a top 10 on the PGA Tour, that’s a heck of a result.

4. Brooks Koepka (and his prospects!)

The 16th hole on Sunday did not go as planned for Brooks Koepka, who faced a pitch shot for eagle on the par-5 and ended up with bogey, effectively handing the tournament to Justin Thomas. Things quickly reversed course on No. 17 green when Koepka canned a 40-footer from the fringe for an unlikely birdie. With Thomas in trouble at No. 18, the tournament was back on! And then it wasn’t: Koepka took an overaggressive line on No. 18 off the tee and rinsed it in the water, making double bogey. Game over.

But on a macro level, the final three holes of Koepka’s week felt largely irrelevant. Look no further than the PGA Championship betting markets, which instantly shot Koepka to the top of the odds boards alongside Thomas and just ahead of characters like Jon Rahm, Rory McIlroy and Bryson DeChambeau. What does a T2 mean for Brooks Koepka? It means he’s back, he’s healthy enough and he’s primed for three-peat contention this week at TPC Harding Park.

5. Xander Schauffele (and his quadruple bogey!)

Here’s the thing, though: Schauffele played the other 71 holes of the golf tournament in 13 under. He made just one bogey, best in the field. He led the field in scrambling and strokes gained around the green. And if you could somehow magic that quad into a par, he’d have finished with the same score as Thomas. His was hardly a flashy T6, but you don’t have to look hard to see bright things ahead for Schauffele.

6. Bryson DeChambeau (and his curiosity!)

At one point early on in CBS’s Sunday broadcast, they cut to Bryson DeChambeau taking a drop from an unlikely location on No. 18. That’s because, as they alluded to, he was essentially trying to drive the green. No. 18 at TPC Southwind, mind you, is a 450-yard par-4 and on Sunday played as the hardest hole on the course. As the crow flies, DeChambeau might have only needed like, 360 yards to carry the water, but he only made it 329 on the fly. But hey, plenty of guys made bogey on 18 in far less interesting ways. Big-time props for the effort.

7. Rafa Cabrera-Bello (and his finish!)

One of the funny things about these WGC events is that there’s no cut, which means everyone cuts a paycheck. Sure, Rafa Cabrera Bello wasn’t quite on form this week, and his best round of the tournament — a Sunday 2-over 72 — left him in solo 78th (out of 78) four shots behind 77th. But Cabrera Bello still made $30,000 from the $10.5 million purse for his efforts. Had he battled to chase down Sebastian Soderbergh, he would have earned just $250 more.

I can’t say precisely whether or not “80 percent of life is just showing up,” as the saying goes. But there’s no question that, in this case, just showing up is handsomely, handsomely rewarded. For that, Mr. Cabrera Bello earns our sincere congratulations.

8. Tiger Woods (and his schedule!)

Sure, no golf fans were happy that Tiger Woods skipped out on WGC-Memphis. No golf fans are happy that we’ve seen him play golf just once since February. But now that we’ve made it to the Sunday preceding the PGA Championship, it does seem like Woods made the right choice by trekking out to California early and playing a Sunday practice round at TPC Harding Park when you consider the alternative: slogging through four days of Memphis in August before a cross-country flight.

Woods may not play well this week, but his final week of preparation seems to make sense.

Before playing back-to-back tournaments at Muirfield Village, Jason Day’s recent results page looked like this: MC-WD-MC-MC-T46-MC. Rumors have swirled about Day contemplating early retirement, and the former world No. 1’s fall from the top has only flown under the radar because we’re collectively even more obsessed with the puzzling struggles of Jordan Spieth.

But over his last three starts, Day has very quietly (Shh!) posted three top 10s. He finished T7 at the Workday, T4 at the Memorial and threw down four rounds in the 60s in Memphis to finish T6 at 9-under. Again, don’t tell anybody! Play it cool. But Jason Day could be rounding into proper playing form again.

10. Justin Thomas (and his POTY campaign!)

I know, I said this was going to be surprising winners. But chances are that over the course of this disjointed season (which you’ll recall started last fall) you’ve lost track of the Tour’s Player of the Year race. Well, Saturday night some folks started getting ahead of themselves and I saw multiple mentions of Brendon Todd running away with that honor if he could hold onto his 54-hole lead on Sunday.

First of all, that was a big if, considering he had some of the best players of the generation hunting him down. Second of all, Todd’s 5-over 75 was the highest score of the day. As a result, it’s Thomas who immediately catapults into the POTY driver’s seat. He’s now won three times this year — at the C.J. Cup, the Tournament of Champions and now in Memphis — plus recording a playoff loss at the Workday, nine total top-5s and an ascension to world No. 1. There’s only one caveat: With only one major this PGA Tour season, the winner of next week’s PGA Championship will have an outsized claim to the throne. Just another reason to tune into the action all week at TPC Harding Park.