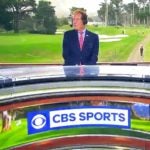 Phil Mickelson helped liven up the CBS set on Saturday with Jim Nantz and Nick Faldo.

There was no grand, months-in-the-making plan to bring Phil Mickelson into the CBS tower during the third round of the PGA Championship.

Like many of the best things in life, it just kind of happened.

“It just worked out,” Mickelson said after he signed for a final-round 73 Sunday at Harding Park that dropped him well down the leaderboard. “I made the cut, so I’m going to be here. I had an early tee time, so I had [Saturday] afternoon to spend time or to waste time.”

And boy, did he spend it. Seated alongside CBS mainstays Jim Nantz and Nick Faldo, Mickelson put on a roughly 90-minute show that golf fans are still buzzing about. After opening with a clunking joke that soared over Sir Nick’s head, Mickelson settled in, found his footing and regaled viewers with a delicious combination of insight, candor and wit, on several occasions using Faldo as his foil.

“To have a wonderful target like Nick, that made it nice,” Mickelson joked on Sunday. “I’ve always had a good rapport with Nick going back to when I played with him as an amateur in the Masters and he was really kind to me. I’ve always enjoyed his kind of wit and British humor. So, we’ve always had some good banter at the Champions’ Dinners, and it was just an easy environment to spend an hour or so.”

Mickelson also tipped his cap to Nantz, saying, “having a guy like Jim Nantz kind of set things up and kind of stage what to talk about made it easy, because it’s not like I prepared for anything.”

It’s unclear whether Mickelson could make a return appearance in the booth at future CBS events, or, as some fans speculated, if the network was trying out the five-time major winner for an announcing post. When reached by GOLF.com, a CBS spokesperson declined to comment. Both Nantz and Lance Barrow, CBS’s coordinating producer of golf, also declined to divulge any further insights to GOLF.com.

Mickelson said that he has long had a “good relationship” with the CBS golf team, adding that he plays fantasy football with some of the network’s commentators and producers, including Barrow and Sellers Shy, who is assuming Barrow’s post after this season.

The best unintentional result of Mickelson’s broadcasting debut may have been that is has surfaced a new golf rivalry. Whatever playful tension exists between Mickelson and Sir Nick spilled over to Twitter on Sunday.