For the first time since March, PGA Tour players have some company 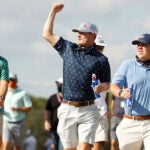 A fan celebrates a shot during the first round of the Houston Open.

HOUSTON – When it came time to skip out of Chicago for a few days, or skip out on fifth-grade classes from the Katy School District, becoming the first fans at a PGA Tour event in nearly eight months was all the excuse golfers needed.

Thursday’s opening round of the Houston Open was the first time the PGA Tour had allowed fans at an American Tour event since March 12 at the Players Championship, which was canceled by the Covid-19 pandemic. In all, 2,000 fans, the maximum allowed, walked the grounds of Memorial Park Golf Course.

While masks at (almost) all times and plenty of signs on social distancing and hand sanitizer were the order of the day, the main objective for the fans who snagged the coveted tickets was live golf in person for the first time in forever.

That was reason enough for Luke and Marissa, who declined to give their last names, to hop on a flight for the 1,082-mile trip from Chicago to Houston for Thursday’s opening round, in sunshine, blue skies and 79 degree weather. “This is our first trip in 11 months, and it’s already snowed in Chicago once,” said Marissa, a corporate recruiter.

“We went to the British Open last year, the Waste Management in Phoenix this year. This is what we like to do. When I heard the Tour was allowing fans this week, I hopped on the internet and got a ticket,” Luke said.

“I had to go to Stubhub to get one for Marissa, but we got super cheap flights to Houston, pretty cheap rooms in downtown Houston, and plenty of food and drinks. We are seeing the sights and just glad to be outside,” added Luke, who was in the finance industry in Chicago. “It’s probably $1,000 or a little more for the week, but in Chicago, you can’t even dine inside at a restaurant.”

Crew Carlson, 11, and his dad, Brett, didn’t have to pay nearly as much or travel as far to come down from nearby Katy, Texas – and view their favorite golfer, Jordan Spieth.

“It’s awesome to be out here and see the golf in person,” Brett Carlson said. “Jordan is the reason Crew took up golf, and we wanted to see him.”

Crew wore his Jordan Spieth Under Armour hat and his face mark as he walked along the fairway ropes, thrilled to see his idol in person.

The players were just as happy to see the fans lining the ropes once again.

“The low noise, the reactions are all timed as part of your shot,” said Stewart Cink when asked what he missed without fans. “That crowd rhythm is where the energy comes from.”

In fact, the only complaint Texas native Jimmy Walker had was there were only 2,000 fans.

“I wish there were more this week, but at least it’s a start,” Walker said.

Local tournament officials wished there were more, as well, but settled on 2,000 after discussing it with the PGA Tour and City of Houston health officials. The U.S. Women’s Open, 20 miles away from here next month, is not allowing any fans.

“We could have sold 20,000 easy – there was such a demand,” one local official said. “The tickets we had went in just a few hours.”

For the most part, fans complied with the mask rules except when eating or drinking, but social distancing was forgotten by the time they stepped on the first hole.

“It’s pretty much shoulder to shoulder on every green,” said Houston business owner David Miller, who came as the guest of a client. “I’m trying to live my life, but be cautious about it.”

Spieth said he was taking a more wait-and-see approach with having fans.

“Yeah, I think we have to see,” he said. “It certainly felt more normal as we were playing, so obviously if we’re able to do it safely, that’s a huge win for the tournaments and the Tour. Hopefully it continues to go well like it did this morning.”

“Pretty much everyone was wearing a mask that I saw,” added Scottie Scheffler, who was tied for second, behind leader Brandt Snedeker, after a 67.. “I felt very safe out there on the course. So for the players, I’m sure it will be fine.”

About the only disappointment for Houston residents Clayton and Caleb, who declined to give their last names, was the lack of autographs or other interactions with the players.

“Have you seen any players giving autographs out here,” Clayton asked. “We’re going to find Phil (Mickelson) – he’s always good for an autograph or fist bump.”

Alas, the best Mickelson could offer was his traditional thumbs-up gesture to fans who called out his name by the hundreds. But presumably to those in attendance, it was better than seeing that just on TV.