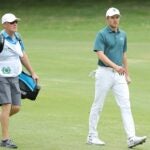 Jordan Spieth (right) had his father Shawn (left) caddie for him at the 2019 WGC-Mexico Championship.

Jordan Spieth’s father, Shawn, is caddying for him this week, and after just one round he’s already committed one of the worst mistakes while carrying the bag. A “no-no” as Jordan told him.

Shawn, who is filling in for Michael Greller, just wanted to make sure Jordan didn’t try to do too much on the par-5 13th. Unclear? Well, Jordan had apparently done a little too much on the 11th hole Thursday, having to grind out a par on the par-5 after a less-than-stellar approach shot.

Fair enough! Jordan made another par on the par-5 but was in good enough spirits to laugh about it afterwards.

“But yeah, it was funny,” Jordan said. “I know he’s enjoying it and it’s a tough walk. The other time he caddied for me was Mexico City, which was 8,000 feet, so I’m not exactly picking the easiest ones for him.”

Spieth made five birdies en route to a first-round 70 Thursday. He’s six back and T39.

Sadly, the reason why Spieth’s father is caddying is because Greller’s mother passed away last weekend. Jordan made it clear that Greller should take whatever time he needs to be with family and friends before returning ahead of the Masters.