PGA of America announces its Player of the Year (hint: it’s not Dustin Johnson) 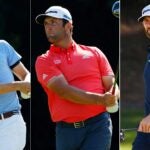 Justin Thomas, Jon Rahm and Dustin Johnson all finished in the Top 5 in the PGA of America's Player of the Year ranking.

On Tuesday, the PGA of America announced its 2020 Player of the Year winner, and it’s not newly-minted FedEx Cup champion and World No. 1 Dustin Johnson. In fact, DJ didn’t even finish in the top 4.

Instead, Justin Thomas took home the award, the second PGA Player of the Year of his career, after first earning the honors following his breakthrough 2017 season.

So what gives? It all comes down to points.

In addition, while players earned points at the Tour Championship, they were awarded based on the low score, not the tournament leaderboard. Johnson’s three-shot victory was aided by his 10 under starting score, resulting from his top FedEx Cup ranking to start the event. Tour Championship runner-up Xander Schauffele actually had the lowest 72-hole score, and as a result collected the 10 PGA POY points as if he had won.

So while Johnson collected plenty of points with his wins at the Travelers and the Northern Trust, he didn’t get credit for his triumph at East Lake.

Thomas, on the other hand, captured three Tour victories this season, all of which earned him valuable POY points, even though the first of those wins came in October, at the CJ Cup, and the second in January, at the Tournament of Champions (which, like the Tour Championship, featured a similarly slim field). He won an additional 20 POY points for topping the money list, and also finished third in the Vardon Trophy race, earning him another 16 points.

All in all, Thomas accumulated 66 points, a full 10 points clear of runner-up Jon Rahm (56). Collin Morikawa finished third with 54 points thanks to his win at the PGA Championship, the only major counting towards the 2020 award.

Though Johnson finished in fifth place in the PGA of America’s ranking, he still has another chance to take home some POY hardware. The PGA Tour presents its own Player of the Year award, which is determined by a membership vote, later this month.