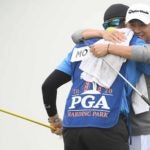 Collin Morikawa was a worthy champion for a different kind of major championship at Harding Park.

The PGA Championship has been a major in search of something it could call all its own since 1957, the last time it was played as a match-play event. The ’57 event was No. 39 in this long-standing series. The one that ended on Sunday was No. 102. It will be a game-changer — if we let it.

All these “rules” that we cling to so stubbornly — and they’re not true. If anything good has come out of this pandemic it has shown us to look at things in a new way.

You have to be a bomber to win a major these days.

Collin Morikawa proved on Sunday that that’s not true.

You need years of training, and some considerable distance from your playing prime, to be an effective golf color analyst.

Phil Mickelson showed on Saturday that that’s not true.

You can’t have a major golf event in the middle of an international pandemic.

The four days of golf at Harding Park proved that that is not true.

This is not the time to accept the status quo, old ways, business-as-usual.

The Masters is the Masters. The U.S. Open is the U.S. Open, and British is the British. But what is the PGA Championship?

It’s past, grand though it has been, does not have to be its future.

This outstanding 2020 PGA Championship at Harding Park, despite the many impositions wrought by the pandemic, was an eye-opener.

The PGA Championship could be the one major title played only on public courses.

On the West Coast.

Talk about your West Coast Cool.

This is just to get you in the mood:

Torrey Pines in San Diego. A revived Rancho Park in Los Angeles. One of the Bandon Dunes courses, on the southern coast of Oregon. An improved Chambers Bay, near Seattle. A Washington State course built by the PGA of America. Pebble Beach. Harding Park.

As for early August: East Coasters and Midwesterners can play a morning round, mow the lawn, start the grill and watch the PGA while eating supper!

The PGA Championship can have an identity that is completely its own.

Yes, there are obstacles.

The PGA Championship is slated to be a May event for the foreseeable future, smackdab between the Masters and the U.S. Open. Last year, at Bethpage Black, was its first time in that slot. But then came pandemic.

Can you read a book at home instead of going to the mall?

Can you have a major without fans?

It’s not nearly the same thing, but you can.

Can you rejigger the professional golf schedule in late-night Zoom meetings, introduce Covid-19 testing, teach the hundreds of players and caddies new ways to eat and travel and acknowledge one another?

We are an adaptable species.

The PGA Championship’s past grounds it in greatness. Some names on the trophy: Walter Hagen and Gene Sarazen; Hogan and Nicklaus; Woods and Koepka. Collin Morikawa. The championship’s future can be equally great, but take the event in a new direction.

Morikawa, standing at the winner’s press conference, the Wanamaker Trophy attached almost to his hip, was asked if he could imagine a steady stream of PGA Championships on West Coast public courses.

“Yeah, of course,” the winner, a Los Angeles native, said.

He talked briefly about his affection for public golf.

Rancho Park, for years, was the home of the L.A. Open. Tiger has the junior course record there. A 64, at age 13. For Rancho Park to be suitable for a PGA Championship, it would need a major renovation. But that was once true of Harding Park, too.

Morikawa was asked if he could imagine that kind of revival happening at Rancho, where he’s been, but not for a long while.

“No,” he said good-naturedly.

Well, the West Coast is 1,300 miles long, with Torrey Pines down the road and Pebble Beach up it. The ’77 PGA at Pebble, won by Lanny Wadkins, was one of the best ever. Morikawa’s West Coast PGA win is right alongside it.