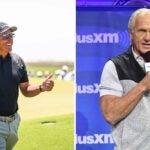 Broadcast Phil is back, and a new tour could be growing more competitive.

Imagine, for a moment, you’re driving through the desert. There you are, hurtling across the asphalt — the only car for miles, surrounded by nothing but the desert landscape and the occasional tumbleweed. The last landmark was 25 miles back, and the next one is an unknowable distance ahead. Suddenly, you look down at the dash and realize your fuel gauge is broken. In fact, it’s been pinned on “F” for so long, you’re not quite sure how much gas is actually in the tank. You’re fairly certain you have enough to reach the next station, however far away, but confident? Well, I wouldn’t go that far.

This, my friends, is the current situation facing LIV Golf Investments, the Saudi-backed golf investment firm headed by Greg Norman and rumored to be creating a new global golf tour. The goal of the new endeavor is, supposedly, to sign many of the best players in the world, using the investment group’s deep-pocketed financiers to prop up a league capable of rivaling the PGA Tour.

But that destination is a long way away. In fact, so far away, it’s not fair to call it a destination at all. More of a goal, if you will — one that will eventually require a cavalry of reinforcements before it can even sniff reality. Among the biggest members of that cavalry: players, a supporting staff, millions of hungry fans and yes, a television deal.

Right now, Norman is sitting in what is assuredly a very nice car, with a very broken fuel gauge, in the middle of a very big desert. His only hope, as things currently stand, is that a gas station rests somewhere along this winding road. He’s not convinced such a place exists, but he’s got a buddy in the passenger seat who knows the way, and he swears there’s one coming soon.

So Norman does the only rational thing he can do in the situation: he presses his foot down on the gas pedal, closes his eyes, and takes a bonafide leap of faith.

Welcome to another edition of the Hot Mic, GOLF’s weekly media column. In this week’s iteration, we’re changing up the format a bit to reflect a busy week among golf’s movers and shakers, bringing you a round-up of the biggest stories you need to know before flipping on the action this weekend. First up, we take a look at big news from Norman’s upstart golf tour.

It’s true, television rights deals are the lifeblood of professional sports. No, not marketing deals, ticket sales, sponsorships or superstars. Sure, those make life easier, but TV deals? Good luck surviving without ’em. The NFL’s annual contracts amount to a figure in the multiple-billions, the PGA Tour’s are in the hundreds of millions. TV deals are big business, and for a professional sports league hoping to survive in 2021, they’re a barrier to entry.

It stands to reason, then, that priority No. 1 for Norman and his pals at LIV Golf Investments is to find a television partner, and to find one quickly. Norman knows this well. Back in the 90s, when he attempted to start a different breakaway series from the PGA Tour (called the World Golf Tour), Norman leveraged his connections with billionaire Fox magnate Rupert Murdoch to negotiate a television deal. When Murdoch and Fox dropped their contract with the league amid growing concerns about its viability, their decision was all but a death knell. The league folded shortly thereafter, without ever having staged an event.

With all that in mind, LIV Golf Investments’ Friday announcement that it hired Sean Bratches as its new chief commercial officer marked a significant point of interest. Bratches comes from Liberty Media, a media conglomerate best known for owning a controlling stake in SiriusXM, the Atlanta Braves and Formula 1. He worked there for three years as managing director of commercial operations, helping to foster the racing series into one of the fastest-growing professional sports leagues in the world (a sport whose American audience is exploding in 2021). Prior to his run at Liberty, Bratches was EVP of sales and marketing at ESPN, serving on the network’s board of directors.

Bratches’ skillset will likely lead him into a variety of roles in his new job, but it stands to reason among the most important will be helping a potential new league blaze a path to a television rights agreement. He will join the company’s other new hire, Ron Cross (formerly of Augusta National and the PGA Tour), in helping to establish credibility and legitimacy for a new league that is, as of yet, still in the desert.

While it’s easy to understand the necessity of a media rights deal to Norman and Co., slightly harder is finding a potential fit. CBS and NBC are already deeply entrenched with the PGA Tour, and any potential added agreement would be bad business, and likely viewed as a betrayal by the PGA Tour. Fox could make a return to golf, but the network was so anxious to dump the sport, it jumped at the chance to sell the remainder of its USGA rights to NBC halfway through its initial agreement. ESPN is another option, but it is about to launch a lucrative streaming deal with the Tour. Turner could be the best fit for the new league among the potential suitors, particularly given its success with The Match, but the network would hold a tremendous amount of leverage in negotiations if it’s the only show in town.

In short, there are no obvious answers for Norman, but as with all other things, it all hinges on the product. A few big names and Norman could suddenly find his league not just viable, but profitable. A lack thereof, and he could find his car sputtering in the desert.

A few weeks ago, this column dubbed Phil Mickelson the current or former player we most hope to see work in television someday. His intellect, intuition and wit make him an easy fit inside any booth, as he proved during his dazzling hour on CBS at least year’s PGA Championship.

In a few weeks, Mickelson will return to the booth again, albeit in a different setting. According to a handful of reports (Golf Digest’s Dave Shedloski was first), Phil will join Charles Barkley on Turner’s broadcast of The Match V. The Match, which is slated for The Wynn Golf Club in Vegas, will pit Bryson DeChambeau against Brooks Koepka on Black Friday afternoon. Jeff Neubarth will once again head up production for Turner’s team.

With Phil’s addition, we’ll certainly be watching, though we certainly hope the competitors provide a bit more substance than July’s Match IV.

For all the talk swirling Norman’s proposed league, the PGA Tour has quietly (and steadily) been shoring up its own front. Justin Thomas spoke last week about Tour leadership’s increased transparency, and Tuesday’s announcement of doubled purses for the strategic partner European Tour certainly hammered the point home: the Tour ain’t going anywhere.

Still, the Tour’s other Tuesday announcement — about its investment in Comcast/NBC Universal’s “SportsTech Accelerator” — was worth noting. The SportsTech accelerator is NBC’s own incubator, a concept borrowed from Silicon Valley in which investors provide funding and early support for startups in exchange for small ownership stakes.

NBC’s incubator focuses specifically upon “innovative technologies that could help improve sports and how fans enjoy them,” according to a release. For the Tour, a few ventures currently in NBC’s portfolio that could prove interesting:

– Eon Media, an AI-based company that can read every frame of a broadcast and communicates exactly the amount of screentime that an inputted value (like, a logo or player) appears.
– GlobalM, whose tech promises to accelerate streaming speeds and quality.
– XIQ: A company providing “golf cart fleet technology.”

Of course, a natural counterpoint is that the easiest solution for the Tour to improve its fan experience is to, y’know, actually improve its fan experience. Some ideas, should the Tour pursue that route? Change the current arcane rules around social media sharing, overhaul the commercial structure and accessibility of the broadcast product and double down on brands like Skratch and the forthcoming “Drive to Survive” spinoff, which help to spread the sport’s most relatable characters and moments.

My good friend Paddy Cotter spent the last two years making “16” — a documentary exploring the community that formed at Penn State (and beyond) in the wake of the tragic death of star lacrosse goalie Connor Darcey. The film is honest, raw and unrelentingly inspiring; the sort of story that moves fans of any sport. If you have an hour, it’s worth a stream.