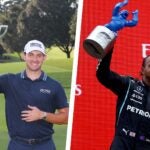 Should the PGA Tour (and Patrick Cantlay) follow the path to popularity set out by Formula 1 (and Lewis Hamilton)?

Much has been made about the newfound sprawling appreciation of Formula 1 by sports fans in the United States. The sold-out Grand Prix in Austin this past weekend is one solid piece of evidence. Another would be the sport’s star, Lewis Hamilton, featured by the Wall Street Journal as a 2021 Sports Innovator of the year. A third, potentially the most important, is that viewership has increased by nearly 40% in just two years.

The question for this golf website is simple: can the PGA Tour replicate that?

Golf as a sport is more than just the PGA Tour, just as racing is more than Formula 1. But in terms of the greater sports ecosystem, golf’s biggest asset is the PGA Tour. As much as some governing bodies may not like to admit it, the health of the game, at some level, is directly tied to the success and popularity of the PGA Tour. So increased popularity, like the kind F1 has seen over the last few years, is an obvious goal. And one the Tour seems focused on. But is that popularity increase possible? Can the current iteration of the PGA Tour see an F1-styled bump? One sports writer laid out the process on Twitter Wednesday.

Jacob Feldman, who writes for Sportico, a sports business website, analyzed the F1 success story and broke down what he calls “The Seven Habits of Highly Effective Sports.” You can see it all in the thread below, which buzzed around Twitter Wednesday morning. The replies and quote tweets sang in near-unanimous agreement.

The other thing about those replies were sports fans discussing how plausible it would be for other leagues to replicate this action. Leagues like the NHL, or the MLS, or perhaps the PGA Tour! Here, we’ll focus on the latter, with those seven commandments slightly edited to fit Tour jargon.

Feldman shared a graphic that shows the PGA Tour’s engagement on Facebook, Twitter, Instagram and YouTube had increased 14% between 2019 and 2020. The Tour schedule featured a segmented schedule in 2020 with a pandemic shutdown, which should be noted, but that 14% is certainly a positive sign. Will that trend continue once the 2021 figures are tallied? I’d guess so. The Tour used to be very restrictive when it came to sharing content of results that could be deemed negative. Shanks, missed short putts, etc. were largely kept off the Tour’s feeds. But sometime in 2021, that seemed to change. The Tour began embracing those tricky but often viral moments, sharing those posts in a fun way, just as you might post your pal’s embarrassing swing on a buddies trip. It’s all in good fun, anyway. What’s the hurt?

Secondary to that, the Tour produces all kinds of social media posts for its biggest stars, and a recent push has been to create mini hype videos of players that can be shared in advance of a tournament they are playing in. The videos are good, simple and effective! The perfect trio.

Not a ton! Though the Tour has long made an obvious effort to shut down sharing of clips from its events on social media through DMCA takedown requests. While it is entirely the Tour’s right to share its content on its own, other sports leagues have seen social popularity boosts from more liberal sharing policies. We’re just trying to promote the product with you!

This one feels less important, but the Tour is certainly thinking about everything it can do to draw fans to events. After a year with limited or zero spectators, that’s millions of dollars in ticket revenue that disappeared. Can the Tour double down and have concerts at every event? Concerts every night of the tournament? There are probably many events to make this a reality. But the concerts definitely exist at a number of events already. Does that mesh well with this sport? Does that even matter?

The most revolutionary thing the Tour could do is eliminate half the schedule. Create relative scarcity in your product, such that it aligns more with the level of demand. Whether this would be smart or catastrophic, the Tour is not going to do that. One of Jay Monahan’s proudest accomplishments (and biggest jobs) as a commissioner is filling out the schedule to the brim. There are 49 events on the 2021-2022 Tour schedule. For even the most faithful golf fans, it is difficult to care about everyone. But the most ardent supporters of F1 don’t let a race go by without tuning in. That’s because there are just 20 races. If the Tour cut down the number of events, each would get greater attention. Or so the theory goes.

Some might consider this part out of the Tour’s hands, but it is squarely right in the Tour’s wheelhouse. The product might be streamed on Golf Channel or CBS or NBC or ESPN, but the Tour communicates things that matter to it (and to sponsors). There’s a reason why CEOs end up doing interviews with Jim Nantz on Sunday afternoons.

A lot. We only recently started having drones explore the expanse of golf course settings. Only recently have we seen ubiquitous use of shot tracer. Analytics and gambling are just now being injected into the broadcast, but are those analytics being explained in the best way for new fans? Occasionally, very important shots are delivered on half the screen while a commercial for FedEx streams next to it. And sometimes Sunday charges from players deep in the field are basically invisible to those at home. Is it crazy to ask for every important shot to be shown? No, because Augusta National made every shot from every player available on its website years ago. The Tour has dabbled in this with certain events, but not gone fully all in. Is that an expensive enterprise? Undoubtedly. My colleague James Colgan has written about it at length. One thing is clear when following along on Twitter during a Sunday telecast: if there was a sports broadcast genie, three wishes wouldn’t be enough.

This facet of the F1 approach is not too different than the last one. And the PGA Tour is perhaps invigorating its broadcast with its new broadcast deal that loops in ESPN alongside NBC and CBS. As has been proven by the recent flurry of hockey content on ESPN and ESPN.com, having a content deal with The Worldwide Leader brings more attention to your sport.

As referenced above, MORE streaming is a good goal, and hopefully with networks that peddle their secondary streaming services — Peacock, ESPN+, CBS Sports — we’ll move closer to having every relevant shot viewable.

Feldman points out how F1 has improved its product in recent years by tweaking its rules. Most every popular sport has done that, too. The NFL protects passers and receivers more than ever. The NBA protects ball-handlers from pesky defenders. Major League Baseball has altered its baseballs over the years to fly longer distances. Spoiler alert: golf will be extremely slow to do anything like that. And that’s just fine. There’s an extreme level of parity on Tour these days, even while stars exist. In the last 13 months, Dustin Johnson, Abraham Ancer and Martin Laird have the same amount of Tour wins. Only two players have won more than one major during the last five years: Brooks Koepka and Collin Morikawa.

It’s totally plausible that the golf ball will be rolled back as a means to fight distance gains in the game. How will that affect parity? It’s extremely hard to say. I don’t know that it makes leaderboards any tighter, as F1 did. One rumored facet of the Super Golf League is 54-hole tournaments, which definitely bunches up the leaderboard more. Fewer holes = fewer opportunities for the cream to rise to the top. That said, four rounds is just fine by me. Russell Henley and Mackenzie Hughes led the U.S. Open after 54 holes this summer.

How do you get Lewis Hamilton to get profiled by the Wall Street Journal? How does Daniel Ricciardo become a fan favorite? F1 has created avenues and incentives for them to show their personality, tell their story, show off their all-world skills, etc. That’s where the Tour’s Player Impact Program comes in handy.

For those new to the scene, the PIP awards 10 golfers at the end of the calendar year for basically being popular via one means or another. An algorithm spits out the biggest movers and shakers, both on and off the course, and dishes out millions at the end of the year. As a result, not necessarily directly but semi-directly, we have things like Brooks Koepka facing off against Bryson DeChambeau on Black Friday. We have Jim Herman, the 184th-ranked player in the world, showing off his wit and humor.

One thing the PGA Tour doesn’t really have is a true rivalry. F1 has its best racers often duking it out right next to each other. But with different schedules, different priorities, etc., golf doesn’t have a rivalry. Tour stars will be the first to tell you they’re best buds with other competitors. Brooks v. Bryson proved to be delicious fodder at first, but has sputtered in recent months as things got a bit ugly in the gentleman’s game at Tour events. The aforementioned Match — a series of made-for-TV matches that are overblown with corporate sponsorship activity — hasn’t exactly delivered excitement yet. The upcoming Netflix docuseries that hopes to emulate F1’s Drive to Survive feels like the most obvious room for improvement in developing stars and their storylines. How much will the Tour and its players lean in?

This is where F1’s ‘Drive to Survive’ show on Netflix comes in. The best golf content on Netflix right now is exactly that, but for junior golfers. It’s called The Short Game, and it became popular shortly after it was released in 2013. Other than that, there’s a largely-animated mini doc on Jean Van de Velde’s collapse at the Open Championship. The cupboard is bare. Thankfully content behemoths are in a spend now, ask questions later phase, and the Tour can dive in right where other leagues have.

Seven weeks ago, GOLF.com’s Dylan Dethier reported all he could about the plans, but the figures involved, production timeline, etc. are still mostly unknown. This reported series will not be a quick fix at all. But there’s a reason it’s been greenlighted. According to The New York Times, ‘Drive to Survive’ has seen viewers stream its third season quicker and more thoroughly than its first, which is among the rarest of TV show feats. It might take some time, but there’s room to believe it’ll be impactful.

And while we’re being greedy, extend it all further. The Tour is expansive — it goes beyond just the best players in the world, to the best senior players, and also a seemingly endless list of minor leaguers who toil on the Korn Ferry or Canadian tours. Amplifying them more seems like an obvious next step. But hey, there are clearly other things to worry about first. Just scroll up.