‘This is only the beginning’: Greg Norman to helm Saudi-funded golf investment group, reveals plans 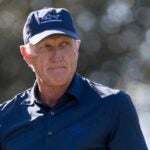 Greg Norman has been named CEO of LIV Golf Investments, which is investing heavily in the Asian Tour.

Press releases are the limited liability companies of communiques. They hint more than they say. Consider the one issued by a new golf company called LIV Golf Investments, broadly released Friday morning at 8 o’clock sharp. Here are three items plucked from its two pages:

(1) Greg Norman has been named at the CEO of this private company, which has offices in the United States (Norman lives in South Florida) and Great Britain (Norman won two British Opens). An Asian office is planned, the release says. Near its bottom, you can read this LIV Golf Investments mission statement: “Its remit is to holistically improve the health of professional golf on a truly global scale and support existing stakeholders to help unlock the sport’s untapped potential.”

(2) LIV Golf Investments says it will make a 10-year commitment of at least $200 million to underwrite 10 new full-field Asian Tour events, to be held in Asia, Europe and the Middle East.

(3) The majority shareholder of LIV Golf Investments is the Public Investment Fund, the investing arm of the Saudi Arabian government.

(2a) Compared to the cash-rich PGA Tour, with its never-ending season, where the combined purses for 50 events in 2021 was $392 million, the Asian Tour’s schedule and finances are modest. In 2019, the Asian Tour’s total purses were under $20 million for its 24 events.

(3a) Public Investment Fund (PIF) is the secretive, and vastly wealthy, investment company of the Saudi Arabian government, a fund that is chaired by Mohammed bin Salman (MBS), Saudi Arabia’s crown prince and minister of defense, according to The Wall Street Journal and other business-news media outlets. A report released this year by the U.S. Director of National Intelligence linked the murder of the Saudi critic and Washington Post columnist Jamal Khashoggi to Mohammed bin Salman. PIF has also made substantial investments in a range of publicly-traded U.S. companies, including Boeing, Uber, Disney and Bank of America, per news stories about the PIF’s SEC regulatory filings.

The Friday LIV Golf press release makes a reference to the hiring of several “high-profile C-Suite executives,” though no names are listed. The press release carries a West Palm Beach dateline but uses chiefly British phrases like “prize fund” (known typically as “the purse” in the United States) and renders the sum $200 million as “$200m,” as the British papers do. And then there’s the use of the word amongst. (Very British.) There’s something mysterious and veiled, really, about the entire release.

Norman hints at that when he is quoted in it saying, “This is only the beginning. LIV Golf Investments has secured a major capital commitment that will be used to create additive new opportunities across worldwide professional golf.”

What does that mean? The phrase only the beginning? The phrase additive new opportunities?

It means that this Friday-morning press release is probably little more than a warm-up act for the next LIV Golf Investments announcement, one that will likely offer some limited details about the Saudi-backed star-driven golf league that Norman will reportedly oversee. Norman has been associated with such a league through most of the pandemic.

And, really, long before. He has been ruminating about such an idea since the early 1990s, when he started pitching his idea for a world golf tour to Deane Beman, then the PGA Tour commissioner.

In that period, Norman was frustrated by the number of tournaments he had to play on the PGA Tour (15) to keep his PGA Tour playing privileges. He wanted to play fewer events in the U.S. and more in different parts of the world, where he could collect large appearance fees.

Norman has never let go of what he believes is the fundamental good sense of such a tour, for professional golfers who want to maximize their earnings and for fans who want to watch more star-driven golf.

And who will provide the major capital commitment he cites? If you’re thinking the Saudi fund, PIF, your logic stands to reason.

By email, a LIV Golf Investments spokesperson sent a statement from Norman regarding PIF’s investment in LIV Golf to reporters: “I am pleased that the investor base is 100 percent commercially driven by the opportunity to improve golf for all involved. I am happy to partner with this group of investors to bring the significant resources to bear that are necessary for the fundamental changes required for the greater good of the sport.”

As Greg Norman quotes go, it’s not as memorable as what he said Sunday at Augusta in 1996, the day he saw a six-shot disappear before finishing in second place, five shots behind Nick Faldo: “I screwed up. It’s all on me. But losing this Masters is not the end of the world. I still have a pretty good life.”

Of course a Friday-morning press release is not a hot-and-bothered Sunday-night press conference.

Anyway, Beman was a professional golfer who became a commissioner. It looks like Norman is seeking to do the same thing. But Beman didn’t have to recruit players. They came to him. Norman will, checkbook in hand.