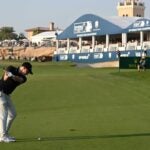 Under a new partnership with UAE-based logistics company DP World, the European Tour — which will be rebranded the DP World Tour — will increase its overall purse money in 2022 to $200 million, or roughly twice as much as players vied for in 2021, with a minimum purse of $2 million for each event.

In the Tuesday announcement, the tour said it would have at least 47 events in 27 different countries next year, including new tournaments in the UAE, Japan, South Africa and Belgium. The season-ending DP World Tour Championship will become the first regular European Tour event to have a purse north of $10 million.

The new partnership also will include increased investment in and bigger purses on the Challenge Tour, the European Tour’s development circuit. As part of that initiative, the top five finishers on the season-end rankings will have their travel and expenses covered during the ensuing season on the DP World Tour.

“The entire ecosystem of our Tour will be strengthened because of this hugely significant deal,” European Tour commissioner Keith Pelley said in a statement.

The cash infusion comes amidst an arms race that is raging between the professional golf tours, driven by threats of rival circuits baiting away the game’s best players with huge guaranteed paydays. Last month, Greg Norman was named CEO of Saudi-backed LIV Golf Investments, which announced a $200 million investment in the Asian Tour — and which is reportedly also on the verge of announcing plans for an alternative, big-money global tour. Organizers of yet another would-be tour, the Premier Golf League, also are still hopeful their circuit will become a reality, with cooperation from the PGA Tour.

All of this activity comes just months after the PGA and European tours announced a strategic alliance. Under that partnership, three tournaments in 2022 will be co-sanctioned by the two tours: the Genesis Scottish Open, the Barbasol Championship and the Barracuda Championship.

“I’ve said before that our respective Tours are positioned to grow — together — over the next 10 years faster than we ever have at any point in our existence, and today’s announcement is another point of proof in those efforts,” PGA Tour commissioner Jay Monahan said in a statement.

Monahan didn’t say if the deal was a tactic to drive off any would-be rivals, but in a Tuesday call with reporters Pelley was asked about the looming Saudi-funded league. “Today is about the DP World Tour,” he said, according to Scottish golf writer Michael McEwan. “I won’t distract by speaking on any other subjects but … next week at the DP World Tour Championship, we will have the ability to have that conversation.”

In a time of great uncertainty in professional golf, one thing’s for sure: It’s never been a more lucrative time to be an elite tour professional.