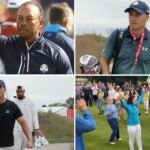 Could Patrick Reed still end up on this U.S. Ryder Cup team?

Welcome to the Monday Finish, where we’re deeply refreshed after an entire PGA Tour offseason of… [checks watch] one week!

We’ve reached the most pivotal chapter yet in Patrick Reed‘s complex, high-profile Ryder Cup history. Since his team debut in 2014, Reed has essentially been the story of Team USA, through his individual success — he’s 3-0 in singles matches — and his rollercoaster ride as a teammate.

I remember Reed’s most recent Ryder Cup match well because as he was warming up at Le Golf National in 2018, I had the unenviable assignment of tracking down his wife Justine to clarify that she had indeed been the one tweeting critiques about team captain Jim Furyk and his decision to split up Reed and Jordan Spieth.

After that match, Reed bit his tongue in the team’s post-loss press conference before eventually unloading to a New York Times reporter later that night.

Oh, and as for the match itself? He played near-flawless golf to beat Tyrrell Hatton 3 and 2. A month later, he’d cite it as evidence the “Captain America” moniker was his. “Still 3-0 in singles,” he said.

As we left Paris that day, I remember discussing how Reed’s kerosene exit from the Cup would make him that much less likely to receive a captain’s pick going forward, if he found himself in need. He felt an obvious pick in late 2019, when Tiger Woods picked him to join the Presidents Cup team. After all, he had a terrific match-play history and ranked high on the points list. In Melbourne, though, his presence once again came with distractions — you’ll recall the shoveling incident and his caddie’s altercation with a fan. In classic Reed fashion, though, his week once again ended with a resounding victory in singles.

But Steve Stricker‘s captain’s picks last week did not include Reed, beyond explaining that he’d “lost sleep” knowing he was keeping Captain America at home. Granted, Reed has been recovering from double pneumonia and had a forgettable golfing summer. (Reed teed it up at the Tour Championship and said he was good enough to go, but still — double pneumonia! That’s a big deal!) Stricker had valid reasons not to include him. But given his resume, his reputation and his passion for U.S. team golf, you’d think American captains would go out of their way to get him a spot on the team. That’s what Team Europe does, after all, and it’s what captain Padraig Harrington did on Sunday when he picked European stalwart Ian Poulter for the team.

This is the exact situation where Reed would have benefitted from some improved politicking. (Last week, Reed would again have benefitted, instead catching flak when his account “liked” a bunch of tweets praising Reed and down-talking other picks.) And now, instead of wondering how he’ll fare against another veteran-heavy European underdog squad, I can’t help but entertain the idea that that singles match in Paris was actually the last we’ll ever see of Reed in the Ryder Cup. These things usually end before you know they’re ending, after all.

But there’s another very real possibility, which is that Brooks Koepka‘s injured left wrist will keep him out of the Cup, opening a spot that could well be filled by Reed. He could end up on this team after all. He could be on this team for years to come.

For now, he sits in a limbo of his own creation.

Billy Horschel considered himself an outside contender for a Ryder Cup captain’s pick but, as he told it Sunday, didn’t even get a call from Captain Stricker letting him know he’d been passed over.

Whatever it was, it worked. Horschel won the European Tour’s BMW PGA Championship with a Sunday 65, by far his best showing since winning the WGC-Match Play this spring.

Typically this section is littered with various winners, but this week let’s just give a shoutout to David Toms for his PGA Tour Champions win and Angel Hidalgo Portillo for winning the Challenge Tour’s Big Green Egg German Challenge, arguably the greatest tournament name in pro golf.

Bernd Wiesberger barely cracked the top 20 at the BMW, but in doing so he secured enough points to automatically qualify for Team Europe and his first Ryder Cup. In doing so, he bumped Shane Lowry into captain’s pick territory and likely secondhand-bumped Justin Rose from the team.

Kiradech Aphibarnrat, Laurie Canter and Jamie Donaldson finished T2, each a shot behind Horschel. The BMW is a big deal, which means runner-up is a big deal, and their respective jumps in world ranking reflect that.

The teams are in!

Shane Lowry — The last man out of automatic qualifying

Plus a whole host of other intriguing next-generation European stars, including the 20-year-old Hojgaard twins.

The best golf video I saw this week was Leona Maguire‘s return to County Cavan and to her Irish club after leading the European Solheim Cup team over the Americans with 4.5 points. You won’t have to look hard to find local pride bursting out of every frame of this ebullient moment.

The word is that the American Ryder Cup team jetted to Wisconsin for a two-day mini-camp Sunday and Monday at Whistling Straits. We didn’t see much in the way of photos or videos coming out of Day 1 save this walk-in video posted by the Ryder Cup — suggesting these guys means business.

After a successful island-hopping golf experience in our latest trip to Maine, I’m ready to take on the San Juan Islands and their epic variety of nine-hole courses. Whether I fight rain and darkness to take on that project this fall or wait for the light of spring 2022 remains to be seen, but they’re squarely in my sights. As for that Maine video? Check it out:

First up: The Fortinet Championship. Hope you didn’t take a long nap this week — you’d have missed golf’s “offseason.” The most compelling player in the field? Jon Rahm, who is the only Ryder Cupper slated to play as of this typing.

As a Seattle resident, I’m legally required to point out just how underrated the Cambia Portland Classic is, and also that Jennifer Kupcho will be among the event’s headliners after her reintroduction to the world stage at the Solheim Cup.