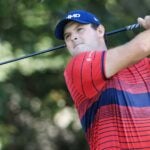 Patrick Reed first liked tweets that did not like Steve Stricker.

Welcome to Ryder Cup drama in the age of 280 characters or less.

It began Wednesday morning, when Stricker did not select Reed as one of his six captain’s picks for this year’s Ryder Cup. From there came the social media scrutiny. And Reed, or whoever operates his account, hunted down tweets that disparaged Stricker’s decision and “liked” them.

Then he “unliked” them.

As first pointed out on a screen grab by No Laying Up, among the tweets Reed liked were ones that said: “Thanks @stevestricker for given the European team a life line by not picking @PReedGolf so disappointed for Patrick” and “@stevestricker you coward! @PReedGolf should of been a no brainer especially after showing what (American flag emoji) stands for over this past few months. This is Captain America you just took away from us. I am boycotting this event and it breaks my heart @stevestricker did this to our country.” Various outlets reported the likes, then Reed, as pointed out by GOLF’s Claire Rogers, unliked all but two Ryder Cup-based tweets from this week:

“The team is not complete without @PReedGolf. Leaving Reed off roster (best American RC Record, only player with perfect singles record, etc.). They couldn’t even try to explain why at GC News Conference.”

And “@PReedGolf keep your head up high. No one on the team is anywhere near the type of competitor that you are and can capture the type of fire that you bring. Use this as fuel!”

For his part, Stricker said Wednesday that he “lost sleep” over the Reed decision. He has not responded to tweets on it.

“It was a very hard conversation,” Stricker said. “I called him first thing. He was my first call. I just — I knew, you know, that it was going to be hard. But he took it like a true champion, and I apologized many times to him and just wanted to make sure that he knew that it was a very difficult decision.

“He handled it, like I said, a champion and really took it well. Very disappointed as you can imagine, but he said all the right things and handled it very well.”

Reed finished 25th at last week’s Tour Championship, his first event after missing the previous two due to what he said was a bout with bilateral pneumonia. He said he would not have played last week had it not been a Ryder Cup year.

Stricker said Wednesday that there are “some extra names in the envelope” should a player need to withdraw from the Ryder Cup due to Covid, but he would not name them.

“I definitely feel like I am way ahead of where I would say everyone expected me to be health-wise, and also I felt like the game was a lot closer than the score kind of anticipated,” Reed said Sunday. “With not playing for a while, you expect a couple loose shots here and there, but as a whole, I felt like the way my health was, as well as the way my golf game was, it was way — I’m way ahead of schedule now. To be able to have two weeks at home to grind and get ready, I have no doubt if I’m on the team I’ll be ready and be 100 percent.”