Reed tried to rock the boat like Phil in ’14, but he could end up being more isolated than ever before

The last question of the U.S. Ryder Cup team’s press conference on Sunday night in France went to Jordan Spieth and Patrick Reed.

The longtime Ryder Cup partners, until this year, stared at each other and smiled for a long, awkward moment. Reed’s mischievous grin said it all: He had a secret and a hair-trigger. Spieth, 25 going on 40, then jumped in to answer the question: Are you surprised the team’s most successful pairing was disbanded, and was the topic brought up?

“We were totally involved with every decision that was made,” Spieth said. “[Captain] Jim [Furyk] allowed it to be a player-friendly environment, and we were involved and we thought that the teams that came out of our four-man squad, we thought that we had two potentially fantastic teams, and we went out confidently and tried to play our best.”

Furyk, even though he wasn’t asked, chimed in.

“Jordan and Patrick have been great in the past,” he said. “I felt like, you know, whether that’s a point of contention or not, I felt like we had two great pairings out of it. So it was totally my decision and my call.”

Reed remained silent as the press conference ended. But not for long.

Speaking to Karen Crouse of The New York Times later that night, Reed said, “I think Jordan could see in my eyes that I was about to light up the room like Phil did in ’14, and that’s why he jumped on the answer.”

“The issue’s obviously with Jordan not wanting to play with me,” Reed told Crouse, adding he had no say in the pairings. “I don’t have any issue with Jordan. When it comes right down to it, I don’t care if I like the person I’m paired with or if the person likes me as long as it works and it sets up the team for success.”

Although his Ryder Cup record leaves plenty to be desired, Mickelson in ’14 was an established team leader who owned five majors and 42 career PGA Tour wins. His words, while perhaps poorly timed, carried weight. And, in hindsight, his comments questioning captain Tom Watson’s strategy put the wheels in motion for changes to come (including the formation of a new “task force”).

“I think there was some legitimate discord between Phil Mickelson and Tom Watson prior to the Ryder Cup,” says Brad Faxon, who played on two Ryder Cup teams. “And I also feel like with Furyk and Reed there was no sign of any discontent there. So I think it was surprising. I think it’s been surprising to everyone to hear his. I’m just kind of blown away. And it’s not doing anybody any good to hear this.”

Most importantly, Mickelson’s teammates supported him. Plus, at age 44 and nearing the end of his Ryder Cup playing days, what did he have to lose?

“Phil is kind of our unofficial spokesman for the team,” says Keegan Bradley, recalling that night in Scotland. “He’s the guy we look to.” Zach Johnson agreed, saying, “Phil became kind of our big brother there and stood up for the team.”

Faxon says he never agreed with how Mickelson handled the Gleneagles situation but admitted some good ultimately came from it. He didn’t agree with what Reed said, either.

“I’m shocked,” Faxon says. “I always have felt like what happens in a Ryder Cup, especially the team room, it’s better left, ya know… when you go to Vegas—it stays in Vegas.”

Reed has a Masters title and, until this year, a stellar Ryder Cup resume. But he doesn’t have the influence Mickelson did four years ago. Reed, 28, is a loner on Tour. He butted heads with teammates in college. Said Henrik Norlander, who played at Augusta State with Reed, in a 2014 ESPN piece: “He shot his mouth off early on when he shouldn’t have.” Today Reed often plays practice rounds by himself and his management team is essentially his wife and a small close-knit group; his wife’s brother is his caddie. Reed’s side of the family is estranged.

Shane Ryan wrote in Golf Digest in March of this year that he once asked Reed to name a friend on Tour. Reed eventually came up with Henrik Stenson. “I wouldn’t say that we go way back,” Stenson told Ryan. “I played one practice round with him at Wells Fargo a couple years ago. And … well, it’s nice if he thinks that everyone he knows a little bit is one of his friends. That’s obviously a way to look at it.” 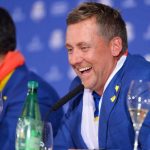 You may also like Lessons from Paris: Why there’s (some) fun in being wrong, Rory’s breathtaking arena, the Augusta of France and more

Mickelson’s candor that night in Scotland only added to his leadership role within the U.S. team program. Reed popping off to a reporter could have negative long-term ramifications. What will happen if he needs a captain’s pick to make a future team? So far, he hasn’t needed one. He qualified as a rookie in ’14, again in ’16 and, buoyed by his Masters win, grabbed the fourth of eight qualifying spots in August. Even if he didn’t sneak into auto qualifying, Reed, who had seven top 10s this season, was a slam-dunk captain’s pick. But what about two years from now? After all of this?

Nothing is guaranteed. Look at the Europeans, who had six rookies on the team at Hazeltine in 2016, and none of them qualified again — or were picked — in ’18. Reed is a lone wolf on a cliquey team that doesn’t need any additional distractions. (Winning just three Ryder Cups in the last 12 meetings proves the task is tough enough without added drama.) That means extra pressure is on him to perform on the course. Captain America sure didn’t play like it in Paris, and he certainly didn’t help his future with the team on Sunday night.

Asked if future captains will remember, and consider, Reed’s comments if the brash talent ever needs a captain’s pick to make a team, Faxon didn’t hesitate.

“There’s no doubt about it,” he said.