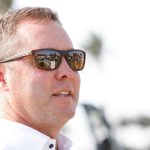 The final round of the U.S. Women’s Open was painful, unexpected and spectacular, because that’s what golf is, played at its highest levels, and on its most beautiful playing fields. What you saw is what Mike Whan saw.

Technically, Whan was at The Olympic Club, at a memorable U.S. Women’s Open, as the LPGA commissioner. This week, in the little New Jersey burgh of Liberty Corner, he’ll start his transition into his new job, as the CEO of the United States Golf Association, succeeding Mike Davis. But at Olympic, people were still calling him Commish.

“At an LPGA event, I’ll walk the driving range and know every last player,” Whan said Sunday night in a phone interview. “At Olympic, 30 percent of the players I didn’t know at all. And that’s part of the beauty of any U.S. Open.”

Thompson, who made a bogey on the last to finish a shot out of a playoff, was a central figure in Whan’s 11 years as commissioner. “A friend sent me a photo of her signing autographs when it was over,” Whan said. “That’s who she is.”

Whan knew nothing about Ganne, the low am, and was charmed about everything he did learn about her. “Stanford is going to have some team when she gets there,” Whan said.

Saso, of the Philippines, the winner, Whan had met once, briefly. “Not a country with a deep golf tradition, but you can imagine how that will change now,” he said.

He flew home on Friday because that’s what he always has done at U.S. Opens. Not to Orlando, as he has done for the past decade, but to Newark. Late last month, Whan and his wife moved to a home on a golf course called Hamilton Farm, about five miles from his new office.

He watched the weekend golf unfold on Golf Channel, on Peacock, on NBC, then back to Golf Channel. Asked to summarize his biggest takeaway from the week, Whan said, “Venues matter.

The last group alone was a tournament onto itself. Thompson’s back-nine 41, when all she needed was 39 to win, it was painful.

Then there was Ganne, Jersey girl, making a putt on the last to take the low-am medal by a shot — at age 17. How spectacular.

And then, of course, the headliner from that group, Saso, 19, the first Filipino golfer, female or male, to win a major, doing it in a playoff. So unexpected. Your 2021 U.S. Women’s Open champion.

“I’ve said this before about Lexi, but you’re not going to have days like that unless you’re good enough to be there in the first place,” Whan said. “She’ll get her name on that trophy before she’s through.” It only seems like Thompson has been around forever. She’s 26.

That a player from the Philippines and a player from Japan, Nasa Hataoka, met in a playoff is old hat for anybody who follows women’s golf closely. As for the fact that the winner speaks three languages, ditto. But Whan knows that for sports fans who only follow the men’s game, this seems remarkable.

“I remember when I was at Rio, for the Olympics, and at a press conference and the first question I got was, ‘How cool is it, to have all these players from so many different countries?’ And I answered the question but I thought, ‘At our next LPGA event, we’ll have more countries represented.’ Women’s golf is borderless. But 30 years ago, would anybody have predicted that?”

Everything that does not evolve dies.

The timing of this event was ideal. The times are changing. We seem to be living in a time when people are craving fairness, equality, equal opportunity, in golf and beyond it. Whan knows that women’s golf is a perfect stage for the pursuit of fairness, equality and equal opportunity. Golf is ripe for all those things. This U.S. Open wasn’t you go, girl — it was you go, period.

Whan was at the end of a long week and about to start another one. He should have been tired. He wasn’t. His foot was on the gas.

“I have a tournament next week, so we’ll take it from here,” Lexi Thompson said, wrapping up her week with a brief press session.