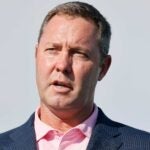 “I tried to shock-and-awe them, with how culturally different I am,” Whan said of his first meetings with USGA officials.

I root for the USGA. That doesn’t seem like a popular stance these days, but it should be, if you like golf.

The USGA only stands for one thing, to make a great game better. But when was the last time you saw Phil Mickelson or Tiger Woods waving the flag for the USGA, as Arnold Palmer and Jack Nicklaus did for decades? When was the last time you heard somebody say, “That U.S. Amateur at Bandon Dunes last year was spectacular?” Or, “Man, those USGA peeps got a lot right, when they made those rule changes.” Instead, we had your favorite players dissing the new dropping procedure, even though it’s way better. Etc.

The USGA needs, more than anything, broad consent from the golfers it governs. It doesn’t have it. But on Wednesday, the organization announced a superb hire who can help make that happen. Introducing a man who needs no introduction: Mr. Mike Whan, the outgoing LPGA commissioner, who will succeed Mike Davis as the USGA’s CEO by this summer.

Yes, Whan is another middle-aged white guy in an organization that desperately needs more women, more minorities, more everyday people, more young people, more life. But the USGA could not have found a better person for this job, one of the most important in golf. Ask most anybody who has come to know Whan over the past 11 years, while he ran and grew the LPGA. He’s a good listener. He’s a good talker. He’s not pretentious. He’s energetic. He makes meaningful long-term relationships and partnerships. He’s charismatic. He’s a big-picture person. He can turn people around. I’m guessing he’ll get to you pretty soon here.

In a recent interview, Whan wouldn’t commit to a position on bifurcation in golf, the fancy-pants way of saying one set of rules (including rules for equipment) for them, another for us. (Long past due, says this duffer-reporter.) M-Whan wants a little time. “I walked into the LPGA with a list of eight things I wanted to do,” he said. “Five of them were wrong.”

He did say, as a first step, he wanted to convince himself and others that the USGA is investing its resources in the best possible way. A vague statement with broad implications. He also said, regarding his new organization, “Respect history but don’t be afraid to make some.” In other words, you can do things in a new way. Maybe the professional and elite amateur game would be better if no club was longer than 42 inches? That’s not, at all, Whan talking. (It’s me.) But it would (I think) improve the game. You shouldn’t need a 675-yard hole to have a true par-5 for Bryson and Co. You do now. Golf is a game played on courses with par-3 holes, par-4 holes — and par-5 holes. You remember that.

Whan spoke engagingly about his time at the 2010 U.S. Women’s Open at Oakmont, his first as the LPGA commissioner, when Paula Creamer, still recovering from surgery to her left thumb, won in one of golf’s grittiest performances ever. Whan is a break-80 golfer. He knows how important that left thumb is for a righthanded golfer. He also knows how important Oakmont is to the USGA, and how important the U.S. Open is to golfers in the United States and really throughout the world.

This year’s U.S. Open (for women) is at Olympic. OMG! For the fellas, it’s at Torrey Pines. Ditto! The U.S. Amateur is at Oakmont. Winner, winner, chicken dinner!

And to keep this bender going: the U.S. Mid-Am is at Sankaty Head on Nantucket; the Walker Cup is at Seminole; the Senior Open for women is at Brooklawn, in Fairfield, Conn. Let’s raise one here to Mike Davis. He signed up these places. But is this Mike Whan walking into a cool job or what?

Whan said that when he first started meeting with USGA officials, including the current president, Stu Francis, “I tried to shock-and-awe them, with how culturally different I am.” It’s a stretch, but just the words alone are fun. And he did once travel to Thailand, as the new LPGA commissioner, wearing a backward cap and a hoodie. So there’s that.

Get this man to the blue blazer factory, immediately!

That’s a bad joke, but for a half-century now anytime anybody wanted to deride the USGA, somebody worked the phrase “blue blazer” into the set piece. It’s kind of a funny thing, because Arnold Palmer fell in love with the USGA and all it represents when he won the 1954 U.S. Amateur. He lived his clubhouse life in blue blazers (when he wasn’t wearing a green one). He gave one out each year to the winner of his tournament at Bay Hill.

Stu Francis was wearing a blue blazer, when we spoke through computer magic the other day. Whan, that cultural radical, wasn’t wearing a blazer at all! But he was wearing a shirt. It was blue.

Whan said he knows there’s a reverence for the USGA among the men and women (and maybe someday nonbinary others) who have hoisted its various trophies. Now is a good time to note that no golfer has ever had a USGA career like Tiger has: three U.S. Junior titles, three U.S. Ams, three U.S. Opens. As for your favorite Phil, he won the 1990 U.S. Amateur, plus all that second-place silver he’s taken home after various U.S. Opens.

Maybe Whan can bring those two home. Here’s hoping he can. Good times will ensue.