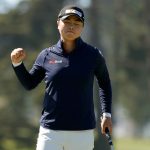 Yuka Saso is the first ever major winner from the Philippines.

And there may have been no cheer louder than when Yuka Saso, at just 19 years of age, rolled in her 12-foot birdie putt on the third playoff hole to win the 76th U.S. Women’s Open.

“I feel great,” she said. “I’m so thankful for everyone who’s supporting me.”

When Saso woke up this morning, she was greeted by a notification on her phone. Rory McIlroy — Saso’s golfing idol — had tagged her in a post.

“Great playing the last few days,” it read. “Go finish it today and get that [trophy].”

She did her idol proud. But for much of the sun-splashed afternoon at The Olympic Club, that outcome looked to be far from the case.

Saso arrived at the course on Sunday in a comfortable position. She had a tee time in the final group and her game was in form. She was poised as she towered shot after shot through the Bay Area breeze on the driving range. When her name was announced by Mike Davis at 10:35 a.m., Saso blasted a driver into the fairway and started a walk she will never forget.

But by the 2nd hole, those good vibes had worn off. Saso’s drive veered well right of the fairway, and her pitch back to safety never reached its destination. She carded a double-bogey 6, and followed it with another double on the 3rd. The margin between her and leader Lexi Thompson had swelled to five.

“My caddie talked to me and said, ‘Just keep on going; there’s many more holes to go,'” Saso said. “That’s what I did.”

As Saso floundered, Thompson thrived. She made birdie at the 1st and tacked on another at the 5th. Saso trailed by six and was an afterthought in the final grouping. While patrons cooed for Thompson and amateur darling Megha Ganne, Saso received only polite claps.

Saso made a birdie at the 7th to chip away at the lead, but as the final group made the turn, the back nine looked like it would play out as a coronation for Thompson rather than the dog fight it would become.

Slowly, the cracks in Thompson’s game began to show. She missed the fairway, chunked a chip and three-putted at 11 for her first double of the week. She then bogeyed the 14th. The field was back in the game.

Still, Saso’s chances appeared slim at best. She trailed by three with three to play. Thompson just needed to avoid a total meltdown and the title was hers.

One group ahead, Nasa Hataoka of Japan was making moves. The three-time LPGA Tour winner birdied 13, 14 and 16 to get to four under. Thompson was within sight.

When the final group reached the first of back-to-back par 5s at No. 16, Saso began her charge like a thoroughbred on the homestretch. She threw a wedge in tight for an easy birdie at 16 and then got up and down from a greenside bunker for another birdie on the penultimate hole. When Thompson’s par putt slid past the cup, Saso was tied for the lead.

Over the next hour, Saso had three separate putts to win the championship. The first came on the 72nd green. Saso played the hole to perfection, but her birdie try slid just low. It was off to the 9th for a two-hole playoff with Hataoka.

Dueling pars came on the 9th before Saso faced yet another putt to win the championship on the 18th green. She powered it through the break and faced 10 feet for par to extend the playoff. It never left its line. The two headed back to the 9th tee box.

On the green, Saso faced yet another winning putt. Draino. The crowd erupted and champagne soaked the newly crowned champion.

With the win, Saso becomes the first major winner from the Philippines, and she ties Inbee Park — to the day — as the youngest winner of the U.S. Women’s Open. She made McIlroy proud, too, and made sure to tip her cap to him after the round.