‘It was just electric’: 17-year-old Megha Ganne had an epic U.S. Women’s Open (and even got to skip calculus) 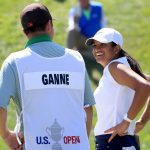 Megha Ganne smiles after finishing her final round on Sunday.

Megha Ganne was easy to spot at the U.S. Women’s Open. She was usually the one smiling.

The 17-year-old from Holmdel, N.J., shared the first-round lead at The Olympic Club and played her way into the final grouping with LPGA star Lexi Thompson and eventual winner Yuka Saso. She struggled on Sunday, making two double bogeys on the front nine and turning in 41, but she rebounded to shoot even par on the back nine for a final-round 77. It was her highest round of the week by five strokes, but that didn’t stop her from receiving a rousing ovation from the crowd when she finished on the 18th green on Sunday.

“Oh, it was just electric,” she said. “I can’t thank all these fans enough. They’ve made my week so much better than it could have been. I just felt like there was so much love and so much support, and all of them are really excited to be out here, which is so great to see because I feel like in a small way I’m making an impact on the game, which is really cool.”

She made plenty of new fans, too.

Ganne, a high-school junior who has already committed to play collegially at Stanford, took photos with kids and signed autographs throughout the week. She was a popular player among young girls, even though she was one of a handful of competitors closest to their age. She called those interactions with fans her favorite part of the week.

“Every single small girl I saw out there I waved to and I couldn’t help but smiling,” Ganne said. “They’re just so adorable and it’s crazy to think that they’re like here for me and want to watch me play.”

Next up for Ganne? Back to school. Last week she talked about trying to cram her calculus homework into her Open prep. “Hopefully my teacher gives me a little bit more time,” she said.

That led to Golf Channel’s Kira Dixon sending a playful Twitter request for Ganne’s teacher to help — and that’s exactly what happened.

The calculus assist was nice. But a T14 in the U.S. Women’s Open wasn’t bad either.

“I’m going to remember this for the rest of my life,” Ganne said. “It’s everything I’ve wanted since I was little, so it’s just the best feeling.”