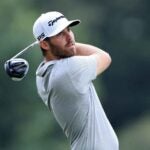 Swing fixes can come to us in the unlikeliest of places.

Some swing fixes come to us in a lesson, others on the range and still others in the precise moment when we begin to doubt we’ll ever fix our flaws.

And then there are those that come to us as if in a dream.

Matthew Wolff knows this to be true, because he more or less experienced it himself.

The story begins with the up-and-coming star mired in a months-long slump at the beginning of this year, a spell so bad he briefly took a break from the game to better focus his priorities. In a stretch from January to June of 2021, Wolff recorded two missed cuts, two WDs and a DQ … and zero top-10 finishes. He looked like a shell of the player who’d quickly ascended to become one of the PGA Tour’s best young players, and who’d gone shot-for-shot with Bryson DeChambeau in Sunday of the previous year’s U.S. Open.

Wolff returned over the summer from his brief hiatus with a new lease on life and his swing — the former coming from months of exhaustive work and self-reflection, the latter in his last waking moments one evening.

“I was about to fall asleep, to be honest, and I was just kind of thinking,” Wolff said from the Houston Open on Wednesday. “I wasn’t too tired, but I was like, I don’t know if I had an early tee time or what, but I was really just sitting there thinking and I was like, well, I was looking at my swing, not so much my setup, and I was trying to do different stuff in my swing.”

But after a few minutes of looking at his swing, something else caught Wolff’s eye.

“Then I remember kind of, like, making a little note of it when I looked at the video in the first place and just kind of realizing, like, Oh, wow, I feel like my setup’s a little different, that’s weird,” Wolff said. “And I looked at my setup versus how I was in college, because for me I played really good golf in college and day in and day out it was just extremely consistent.”

Sure enough, when Wolff looked back at his old swing, he noticed a marked difference in his setup. Whereas in his current swing, he was rigid and slightly hunched over the ball, in his old one, he was in a squatted, athletic stance, his weight further back.

It was a eureka moment for Wolff, who began to notice his swing returning to form almost immediately.

“Went out the next day, I think it was Wednesday, so I had one day to practice it before the start of Sanderson, and from that point I think Sanderson was a really good tournament for me,” Wolff said. “But still just getting used to the setup. Then when I got to Shriners, I felt really comfortable and from that point on I’ve just been rolling.”

Through the early portion of the 2021-22 season, Wolff has already recorded as many top-10 finishes as all of the previous season, and his game is teeming with confidence. Now all that’s left to do is win, which would be his first title since the 3M Open in 2019.

Wolff says, with his new setup in tow, he’s ready to start a new streak.

“I feel like I have a really good chance to win this week,” Wolff said. “There’s a couple things in my game and mentally and physically that I feel like I’ve learned about myself, and with that experience that I have in my back pocket now, if I’m playing good, try to play as much as I can.”