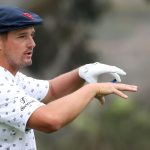 After a second-round 69 at the U.S. Open, DeChambeau told reporters that his bounce-back Friday performance came thanks to a late-night tweak on Thursday evening. No, not one that came during his pitch-black range session, but rather a swing change that appeared to him in a dream.

“I was sleeping and it came to me in the middle of the night,” he said. “Woke up and I was like, hmm, I’m going to try this, and my intuition is pretty good, so I went out and tried it and it worked, just keeping the right wrist bent for a lot longer through impact.”

DeChambeau’s disappointing opening round on Thursday came just days following comments in which he expressed optimism over his chances to overpower Torrey Pines’ South Course in much the same way he did Winged Foot’s West Course last September. But things didn’t get off to quite the same start in 2021. In the wake of his opening-round 73 Thursday, DeChambeau went back to the range well into the evening, using a FlightScope launch monitor to track his ballflight well after the sun had set.

Still, the extended range time failed to cut to the root of the issue. For that, DeChambeau needed to get in touch with his subconscious.

“It’s more just my intuition telling me there’s something weird here, what’s going on,” he said. “I couldn’t figure it out for an hour and a half last night, an hour last night, and going back and just sitting down, eating dinner and just thinking about it, thinking about it, I literally won’t talk to anybody for like an hour, just thinking, thinking, thinking, and sure enough, I went to bed and I found a little something that worked for my driver.”

Fortunately, he says, though swing thoughts might appear in a similar manner to dreams, they’re harder to forget.

“I remember it for the most part,” he said. “I’m pretty good. It’s one simple thought. It’s usually not a complex series of things.”

The comments were the highlight of a quintessentially ethereal DeChambeau presser — one that included a fleeting conversation surrounding the days of yore, when he would swing on the range with his eyes closed. But they also mark what amounted to a noticeable shift in his game for the better.

On Friday, DeChambeau ranked eighth in the field in Strokes Gained: Total, and his SG: Approach improved by nearly three strokes over Thursday. Most importantly, his score improved by four strokes from Round 1 to Round 2, and placed him at even par heading into the weekend, five strokes off the mark set by leaders Richard Bland and Russell Henley. Through two rounds, he ranks second in the field only to the preposterously lengthy Wilco Nienaber.

As for how his sleep quest affected one other key metric (his WHOOP recovery score), DeChambeau says the ends more than justified the means.

“You kind of wake up in a daze and you’re like, okay, I’m going to try that and go right back to sleep,” he said. “It’s all about making myself feel comfortable. For me, it’s all about stabilizing the face, and so I was able to find that, and it worked out there for the most part.”