Matthew Wolff just shot 61. He said these were his 2 keys to success 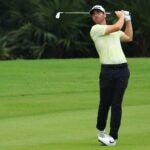 Matthew Wolff plays a shot on the 1st hole during the opening round of the World Wide Technology Championship at Mayakoba on Thursday.

Even going almost a month without a competitive tournament round couldn’t slow Matthew Wolff. The 22-year-old opened the World Wide Technology Championship at Mayakoba with a 10-under 61, good for a course record and two-stroke lead heading into Friday.

In Wolff’s other two starts this season he was T17 at the Sanderson Farms Championship and was the runner-up at the Shriners Children’s Open on Oct. 10. On Thursday, he made 10 birdies and no bogeys and led Aaron Wise by two. His 61 tied his career-low on Tour.

“As soon as I finished the round, my caddie said to me, he goes, ‘You know, I’ve been caddying for you for quite a few rounds and that was not the one that I thought was going to be the lowest,'” Wolff told reporters. “It was very steady, birdies kind of came evenly throughout the round; didn’t really make any mistakes.”

Wolff hit 11 of 14 fairways and 14 of 18 greens. His game plan was to keep it in play off the tee — mission accomplished — but he added that two things were the key to his strong play: his comfortability (i.e. setup) and commitment.

“I think the main thing about how you play well out here is just being comfortable,” he said. “Every single shot I was comfortable over, I was committed to. Yeah, just ended up that, at the end of the day, last putt dropped. I didn’t know it was a course record, it’s really cool to hear.”

Wolff said he could tell his game was on during his pre-round warm-up on the range.

“I’ve just been working with my coach a little bit, George [Gankas], about just kind of setup; really nothing about the swing, just making sure that I’m comfortable in my setup,” Wolff said. “To me, I feel like when I am comfortable, that’s when I make the best swings. So, for me, I just pick the club that I feel most comfortable with and focus on the setup, just keeping the knees a little bent and not standing so on top of the ball and everything kind of clicked today.”

Wolff begins his second round at 1:52 p.m. (ET) off the 1st tee. He’s grouped with Matt Jones and Justin Rose.