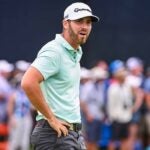 Wolff, pictured here at the 2021 U.S. Open, won a lot of money this weekend thanks to a season-long challenge.

Matthew Wolff played through a difficult season on the PGA Tour this year, marked by several highs and some admittedly honest lows. Last weekend featured both for the 22-year-old pro.

Beginning the season on a tear with second-place finishes at the 2020 U.S. Open and the Shriners Hospitals for Children Open, Wolff failed to record a top 10 in 2021 while battling mental health issues, culminating in a missed cut at last week’s Wyndham Championship.

But Wolff didn’t leave North Carolina empty-handed. In fact, he drove away with an extra $1 million in his pocket, his biggest check of the year.

While Wolff didn’t go low enough to play the weekend at Sedgefield CC, he did do enough to secure a victory in the season-long Aon Risk-Reward Challenge. Here’s how the competition worked: At participating events on the PGA and PGA Tours, a single hole was designated as the Aon Risk-Reward hole, with a player’s performance on that hole contributing to their Risk-Reward standing. The player with the lowest average score to par at the end of the regular season wins $1 million.

Wolff happened to excel on these holes, including the par-5 15th in the first two rounds of the Wyndham. It was enough to earn an average score to par of -1.048, beating out runner-up Kevin Na’s score of -.935.

“Yeah, it means a lot. I think, you know, obviously there’s a lot of money to be made out on Tour, but I’m new out here and every little bit helps,” Wolff said after his round on Friday night. “And Aon puts on a great contest, year-long contest. Just happy that I got it done. And I knew about it kind of the last couple months, so on the Aon holes I was a little more nervous than I usually am, but played them pretty well and just came out on top.

“It’s the Aon Risk-Reward Challenge and I’m a pretty risky player and I guess it just happened to turn out in my favor on those holes,” he continued. “I feel like I have a pretty good game plan every single week, but seems like those holes I just have a better one.”

The $1 million bonus still pales in comparison to earnings Wolff made on the course in his up-and-down season: a whopping $2,507,324. He will continue his season next week at the Northern Trust, the first event of the FedEx Cup Playoffs. But his FedEx ranking of 59th means he’ll have to play well to remain in the Top 70 and move onto the second playoff event.