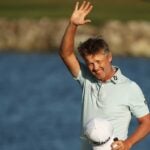 Matt Jones was all smiles after an emotional win at the Honda Classic.

PALM BEACH GARDENS, Fla.—Matt Jones, 41-year-old Australian journeyman golfer, did a difficult thing here on Sunday at the Honda Classic. He won on the PGA Tour. (He’s done that twice in 330 starts.) He won after shooting a first-round 61 that gave him the lead by three, but found himself trailing by three after 36 holes, and getting your groove back is famously hard in golf. He won by playing his fourth round with a guy, J.B. Holmes, who was shooting a million. By which we mean 79.

Now he’s in the field at the Masters next month.

Now he is fully exempt on the PGA Tour through the end of the 2023 season.

Any day here, he can expect a direct deposit of $1.26 million. First-place money.

Jones’ Sunday 68, two under par at PGA National, gave him a five-shot win over Brandon Hagy. Other players finishing eighth or better include Chase Seiffert, Denny McCarthy. So, yes, it was not a star-studded finale. Here are three people who do not care: Matt Jones; Lance Bailey (the winner’s caddie); Melissa Jones (the winner’s wife.) Melissa, as Melissa Weber, was the Miss Idaho in 2009. Someday her husband will be more famous in the Gem State than she. The couple lives in Arizona—Jones attended Arizona State—with their three children.

It’s always fun when an Aussie wins on the PGA Tour. You’ll hear Australian reporters say things like, “Good on you, mate.” You hear a level of candor you don’t often get from American players.

Asked what he was thinking about when Holmes spent close to 10 minutes finding and dropping his ball on the second hole, Jones said, “Nothing at all. I was just waiting, hoping he had a shot.”

You have to be some kind of genius when you can play one of the most important rounds of golf in your life and find yourself thinking about nothing! Also, to have such a generous spirit you hope your playing partner/opponent might have a shot.

Some interesting things about the winner:

*He met his wife at Del Mar, the gorgeous race track in Southern California;

*He would like to play in the 2021 Olympics and next year’s Presidents Cup team;

Jones said he would like to bring his instructor, Gary Barter, to the U.S. from Australia before the Masters, but only in theory. “That two-week quarantine in a hotel, I can’t really justify doing it. Not really fair on him or his family.”

Your 2022 Honda winner is selfless and unpretentious.

“Golf,” he said. “It’s a very tough sport, that we play out here. It’s very cut-throat. We’re working to keep our jobs every year and you have to perform well to be able to do that. It’s been seven years since I won. I’ve had some lean years in there. And to get back to the winner’s circle, and to win this golf tournament, was pretty emotional for me.”