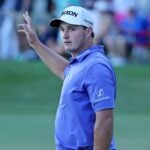 It was supposed to be a cakewalk for Daniel Berger. And if not that, it surely wasn’t supposed to get as close as it did as fast as it did at The Honda Classic on Sunday.

But here we are, discussing Sepp Straka’s first-ever win on the PGA Tour and Berger’s early implosion that brought the rest of the field back into the mix on the Champion Course at PGA National Resort in Palm Beach Gardens, Fla.

Berger, at 11 under, started the day with a five-shot lead over four others — Straka, Shane Lowry, Kurt Kitayama and Chris Kirk — and was six ahead of Adam Svensson. The next closest competitors were all at two under. But despite owning a tie for the largest 54-hole lead in tournament history, Berger gave it all back in the first 70 minutes. Soon enough it was anyone’s game, and Straka took advantage.

The 28-year-old University of Georgia alum birdied three of the last five holes to shoot a four-under 66 and take the clubhouse lead at 10 under. After the final pairing of Berger and Lowry failed to tie him on the 72nd, Straka had his first career Tour victory in his 95th start. He’s the first Austrian to win on the PGA Tour.

“The third round I definitely didn’t have my best stuff and just hung in there and grounded out a good round, and I hit the ball really nice today and really took advantage,” Straka said. “Just hanging in there.”

Berger’s troubles started on the par-5 3rd, a hole he birdied twice this week, when he got caught short-sided in a green-side bunker, blasted out and three-putted from off the green for double bogey. Then on the par-3 5th he three-putted for bogey again. Meanwhile, Lowry made birdies on 1 and 4. Five holes in they were tied at eight under, and just like that about a dozen other players had life, too.

It got worse for Berger before it got better. He bogeyed the 6th — capping a four-over-in-four-holes stretch — to give Lowry a brief lead, but he rebounded when he holed his bunker shot for birdie on the 7th. After Lowry and Berger both parred 8 and 9, they made the turn in a tie for the lead.

Lowry took his second lead of the day on 11, when he rolled in a 14-footer for birdie to reach nine under, and Straka got within one with a birdie on 14. That was the start of his key run. After parring the 15th, Straka, in the pairing ahead of Lowry and Berger, missed the green on the par-4 16th, but he missed in a favorable spot and drained his birdie putt from 19 feet to tie Lowry for the lead.

Heavy rain poured down for the last 30 minutes of the tournament, making the approach into the par-5 18th even more delicate than usual. Straka found the safe side of the green 48 1/2 feet away and then lagged his eagle putt to within inches to convert the easy birdie and take the clubhouse lead at 10 under.

Lowry (one back) and Berger (two back) prepared for their second shots on 18. After Berger dumped his into the water, Lowry, who had to lay up after driving it in the rough, wedged it to 42 1/2 feet but couldn’t convert the birdie to tie. He shot 67 and finished alone in second, one back.

Berger shot a four-over 74 and finished fourth, three back of Straka.