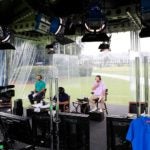 A behind the scenes look at the social distancing measures in place for broadcasters during The Match II.

The gears were already in motion as Tom Brady and Phil Mickelson drove to the 11th tee at Medalist Golf Club on Sunday. Mickelson prepared to pull driver, sensing a glorious opportunity to wield his vitality before a national television audience (and shift the momentum of a slowly widening match). Several hundred yards away, Brian Anderson and Trevor Immelman were in the broadcast booth, separated by a sheet of plastic but sharing a wavelength.

Two days earlier, Immelman and Anderson had toured Medalist for the first time together. When they came upon the 11th, a short, 342-yard par-4, Immelman’s instinct tingled. If Brady or Manning could find the fairway, Woods and Mickelson would have the green light to attempt to fly the trees and drive the green.

As it turned out, Mickelson wasn’t going to wait for his partner to find out.

“Tom, whatever you hit is fine,” Phil told his teammate. “I’m hitting driver no matter what.”

First, Immelman fired into action, describing Mickelson’s line and what he’d need to reach the green. Seconds later, Phil gripped with all his might and wired a driver. TopTracer tracked his ball as it soared over the trees and touched down just a few feet from the hole before coming to rest just off the green. Anderson and Immelman rejoiced.

Mickelson stepped back into his cart and the production truck readied itself. Director Steve Beim flipped to a tiny camera installed in Mickelson’s cart and opened the line to Phil’s microphone. Lefty flashed a million-dollar smile as he reached the green. Anderson teed him up.

Fans — 5.8 million of them, Turner says, were watching the Match II, making it the most-viewed cable golf broadcast — exploded on social media. It was a moment of broadcast poetry, however hokey the punchline. Brady’s 20-foot eagle putt was merely the exclamation point.

For a few hours, the Match II was everything golf on television could be, complete with open microphones, short-game lessons, TopTracers and cart cams. You can debate whether it was everything golf television should be, but those involved in the broadcast are content to view their show through the prism it which it existed: of a made-for-TV charity event, as one of the first major sporting events since the worldwide shutdown and as a miraculous concoction of planning, preparation and luck.

Fifty-two people, fewer than an NFL roster, were permitted on-site Sunday for the broadcast. Producer Jeff Neubarth and Beim, the director, sat atop the live-production totem poll, both of them holdovers from the Match I. The pair helped assemble what Neubarth called an “all-star team” of producers, replay operators, camera crew and on-air talent.

The small team that made the Match II’s broadcast roster were tasked with following a laundry list of safety protocols. Every person was required to undergo a temperature reading every morning and were required to test negative twice before they were allowed on the course.

“We worked with the tournament organizers, the state local government, the PGA Tour,” Neubarth said. “The most important thing we did was to ensure everyone’s safety.”

Even the production truck — typically a cramped, tight-cornered space — was fit to social-distancing guidelines. Turner brought in the cavernous truck used by ESPN for Monday Night Football, while the crew used measuring tape to ensure they were maintaining 6 feet of distance.

Neubarth and his assistant director were the closest of any two people in the truck at 7 feet, 10 inches apart.

“That’s how careful we were,” Beim says. “We could’ve just spread out our arms and said, ‘OK, yeah, we’re more than six feet.’ But we didn’t want anyone to say ‘you guys were not socially distant.'”

Before long, Neubarth and Beim found themselves sorting out the pieces to a nationally televised jigsaw puzzle.

Ultimately, the pair settled upon 10 on-course cameras, three studio cameras and a small army of tiny, remote-operated cameras. Each player would also be equipped with a microphone and earpiece.

“With what we wanted to do, the players were the story,” Neubarth said. “You want to be intimate. The closer you to get to the players, the better the story can be told.”

There was also the compressed schedule. For the Match I, Neubarth and Beim had three months of lead-up. For Sunday, they had three weeks.

And yet, the crew was prepared. On Saturday afternoon, a three-hole dress rehearsal with Woods, Mickelson, Brady and Manning went flawlessly. From the booth, Anderson could barely contain his excitement.

But then came Sunday morning. Heavy storms, flood warnings, thunder and lightning. A broadcast that planned to bridge the gap created by safety restrictions with innovative tech was suddenly handcuffed. The blimp couldn’t fly in the cloud cover, so there would be no aerial shots. Half of the tiny cameras attached to each cart weren’t operational (including a neat overhead angle of each player’s bag for a vantage point of club selection). There was no way of to know whether each player’s microphone would withstand the rain. A pregame shot showed one of the greens almost entirely underwater. It seemed as though the event was on the verge of floating away.

At 3 p.m. ET, Anderson welcomed cable audiences around the country to Medalist Golf Club in the middle of a monsoon. But even as it rained buckets on Turner’s outdoor set, Anderson was cool, relaxed even. At 3:45 p.m., after a brief delay, the golfers teed off. Four hours later, shortly after 8 p.m., the group had raised $20 million for Covid-19 relief and provided a memorable, highly entertaining event.

Anderson, Neubarth and Beim have differing theories on how it all came together.

“Everybody had their role, and everyone checked their egos and stepped into those roles,” Anderson said. “When it was their time, they delivered.”

“If you think about it, the weather actually added the element of likability to it, because Tom Brady, Peyton Manning, Tiger Woods and Phil Mickelson went out there in epic, monsooning rain conditions and played through it all in the name of charity,” Neubarth says. “That’s almost more compelling than watching them on a beautiful, sunny day.”

“Without making a bad pun, it was the ‘perfect storm,'” Beim says. “It was the right time at the right place with the right players and the right weather. Everything just worked.”

“As we were talking on the way home, we helped America smile,” Beim said. “That’s really a good feeling.”