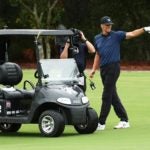 Things were not going well for Tom Brady at Medalist Golf Club, but this birdie hole-out sure helped.

Go ahead, admit it. For a little while there, you pitied Tom Brady.

All you ardent haters in Pittsburgh, Atlanta, San Diego and beyond, all of you left broken and embittered by his exploits, all of you so brimming with anger and resentment, suddenly, on Sunday, you felt a twinge of sympathy for the man.

We understand. It was a tough adjustment. After spending 20 years begrudging everything about him — the Super Bowl rings, the super model wife, the shiny Dentyne smile you’ve dreamed of smacking off his face — now you were kicking back on your coach, live-streaming his suffering, and you couldn’t deny it: your heart was going out to him. Don’t be ashamed. You weren’t alone.

For the first hour-plus of the Match II, at the Medalist, the winning-est quarterback of all time was not a demigod of the gridiron. He was just a golfer. The proverbial blind squirrel searching for an acorn, and not finding one.

He shanked. He skulled. He sliced. He hooked. It got so bad that Charles Barkley — Charles Barkley — sounded concerned. Twitter being Twitter, there were lots of mocking posts. But even that cruel cauldron bubbled with commiseration.

“Relatable golf content,” @ForePlayPod posted as Brady made air-marks with his index finger to tally all of his shots on the opening hole. Brooks Koepka chimed in, pledging a $100,000 donation if No. 12 could muster so much as a measly front-nine par.

Sure, it was for charity, so goodwill abounded. But it still made for something of an upside-down scene: Tom Brady as an object of consolation. And all this from a viewing public that was finally getting its expressed wish. Never mind that Brady had signed up to compete for a good cause.

In the run-up to Sunday’s star-studded fundraiser, sports fans had made it clear that, outside of New England and Tampa Bay, despising Brady ranks among America’s favorite pastimes. Some of us GOLF staffers were asked earlier this week: What are you most looking forward to with this match?

“Tom Brady losing,” my colleague Sean Zak wrote, nicely summing up the national mood: let the proceeds go up, so long as Tom goes down. About an hour into Sunday’s action, Brady didn’t just look bound to lose. He looked like he might lose his mind.

“Tom has to be a couple seconds away from a club toss here…” JJ Watt tweeted.

Soon enough, that changed. You knew it would. On the par-5 7th, after scuffing three shots, Brady holed a Hail Mary of a wedge from the fairway for birdie. His expression brightened. He told Barkley to stuff it. He started talking smack.

He seemed back to being Tom Terrific, the Brady so many love to hate. Except not really. He’d only tied the hole. His team was still down. He remained the worst player of the foursome, and the most interesting to watch. By then, fess up, in his flawed, fumbling way, he’d kind of won you over.

Meanwhile, the charitable donations poured in, more than $20 million by day’s end, a count more important than any on the scorecard. Life is like that. It puts sports in perspective. But sports can also offer us a window into life. On the face of it, they divide us into camps, partisan crowds of tribal allegiance. On a deeper level, though, they reveal our commonalities, even as we’re rooting for opposite outcomes.

For a few hours on Sunday, the Match II made Brady someone we can all relate to, just another guy trying to control his golf ball. You can go back to reviling him later. And just this once, wasn’t it nice for us all to be pulling for the same side?