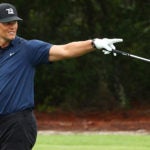 Tom Brady celebrates his hole-out on the seventh hole.

1.  “Amazing what happens when groups of people come together for the common good.”

The main group being the four-ball of Brady, Tiger Woods, Phil Mickelson and Peyton Manning, whose charitable outing generated more than $20 million for Covid-19 relief.

Translation: Dear Mr. Manning, Would you be so kind as to have me as a guest at Augusta someday?

And this time, he didn’t have the ‘tuck rule’ to bail him out.

4. “I shouldn’t wear the same pants to golf that I wear to church.”

The Match II revealed Brady to be no different than the rest of us. He puts his pants on one leg at a time – and splits them, too.

5. “As great as @philmickelson is as a golfer, he is a better man, coach and teammate and potentially has the best calves on the PGA Tour.”

6. “I really enjoy golf . . at halftime of football games we get checked for concussions, in golf, you get refreshments.”

And no one checks midway to see if the ball you’re playing is properly inflated.

But less than eight years from now, he’ll be eligible for the Champions Tour.

8. “@tigerwoods was a great host and champion, and I was especially thankful he missed that putt on the 7th hole. . . had he made it, I would have just went home.”

Woods’ lipped-out bid for eagle was the golf equivalent of a Hail Mary off Gronk’s fingertips. So it goes. With two guys accustomed to breaking their opponents’ hearts, something had to give.

At a reported $50 million for two years, with $9 million in incentives, seems like a wise move.