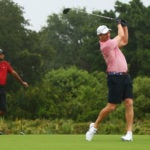 Peyton Manning hits a tee shot as partner Tiger Woods watches on during The Match: Champions for Charity.

On the fifth hole at Medalist Golf Club on Sunday, during The Match: Champions for Charity, Phil Mickelson asked Tiger Woods to mark his ball on the green in advance of his 150-yard approach. A bit of gamesmanship, for sure – the odds were low that Mickelson would hit Woods’ ball, but he wanted him to think he could.

Woods saw Mickelson’s trash talk and raised it by three.

“You want me to use one of my U.S. Open medals (as a marker)?” Woods asked Mickelson.

Woods has famously won three U.S. Open titles among his 15 major championships. Mickelson has infamously won zero and has been second six times. One of The Match’s announcers, NBA star Charles Barkley, laughed during the exchange. It was good trash talk.

It could have been really good.

Forget the medals. Woods wanted to trot out the trophies.

“Tiger wanted to bring his three U.S. Open trophies with him in the car in the parking lot and have me carry one and have him carry one and then go ask Phil if he wanted to carry the other,” Woods’ playing partner in The Match, Peyton Manning, said on The Rich Eisen Show this week. “That got scratched, but he went with the gold medal line to Phil about, ‘Hey, do you want me to mark my ball with one of my U.S. Open gold medals.’ ”

They were shelved when Brady struggled at the start. He was obviously suffering enough. On the first hole, Brady hit his tee shot low and to the left. On the second, Brady hit his second shot out of bounds. On the third, Brady drove his tee shot well right, then hit a provisional well right. On the fourth, with Barkley pledging $50,000 for charity if Brady could hit the green, Brady hit the trees on the right. “Tom, I should have said if you kept it on the planet,” Barkley said.

“When the golf didn’t start out so well, we kind of called an Omaha audible on those,” Manning said on the Eisen show. “It just didn’t feel that was appropriate at the time. I could relate. I was with him. It’s no fun when you’re playing by yourself in those conditions and not hitting it well. I thought he handled it well and obviously kind of got back on track.”

Manning said he will forever remember another exchange.

On the par-3 4th, Manning knocked his tee shot to about 25 feet. Woods followed by dropping his to within about 8 feet, while Mickelson and Brady both missed the green, then failed to chip in. Manning was first to putt, and he turned out to be the only one to putt, rolling it in. It also provided him the pleasure of not really needing Tiger Woods – at least for a hole.