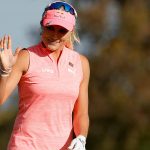 After a third-round 66 at The Olympic Club, Lexi Thompson will take the lead into the final round at the U.S. Women's Open.

SAN FRANCISCO — Lexi Thompson is back at the top of the leaderboard at a major championship. But this is a different Lexi Thompson.

Where Thompson was once a temperamental, moody golfer between the ropes, this week she has been poised and self-assured, no matter how the breaks fall.

“I just realized that I needed to change my mindset,” Thompson said of her recent attitude shift. “It was only hurting me. … The mental side was really getting to me. I was just taking it way too seriously and thinking that Lexi depended on my score.”

While Thompson’s self-worth is no longer rooted in the numbers on her scorecard, those numbers sure were pretty on Saturday.

Battling a brutish Olympic Club on a sunny San Francisco Saturday, the 26-year-old posted the lone bogey-free round of the week — a flawless 66 to take the solo lead at the U.S. Women’s Open. She made birdies on Nos. 4, 7, 9, 14 and 17, the last of which giving her the solo lead.

But this newfound peace between the ropes (and with it, her first 54-hole U.S. Women’s Open lead) did not come with the flip of a switch. It is the result of years of effort to better her mindset.

“It takes a lot of hard work,” Thompson said. “I’ve been calling John Denney a few times a week and just really focusing on the good in my life and just the blessings. Just to be out here is a blessing, honestly.”

One of those blessings Thompson pointed to is the reintroduction of fans on site this week at the Olympic Club. Thompson always commands a crowd, but with every birdie on Saturday, the roars grew louder and louder. When she rolled her par putt in on No. 18, one rowdy patron even yelled out a proposal. “Will you marry me, Lexi?!”

However loud and raucous the crowds got following Thompson though, it was only the second largest gallery on the course. The largest fan following stuck with the penultimate pairing as they tried to get a glimpse of the precocious amateur Megha Ganne.

Decked out in a matching blue quarter zip and Nike hat, Ganne was the star on the course in the third round. Despite facing many instances where it looked like the clock would finally strike midnight for Cinderella, Ganne kept her composure and played her way into the final grouping with a one-over 72.

“It’s been so much fun,” Ganne said with a beaming smile. “I can’t wait to go back out there tomorrow.”

Ganne’s start to the round was not a pretty one, as she had to scramble to make par on the opening two holes, but even with some erratic ball striking, a hot putter kept her within striking distance of the leaders.

Perhaps the most important putt of the day came on No. 6 as she faced 15 feet for bogey, needing a make to keep her first double of the week off the card. When the ball rolled into the cup, Ganne channeled her inner Rory McIlroy, cupping her ear to the crowd as they let out a roar.

“I’ve always imagined myself engaging with the fans like that,” Ganne said. “When I was younger and watching events, I knew I would love it when I would see the pros just even look at the crowd or smile or do anything like that, so I really wanted to embody that today.”

Joining Thompson and Ganne is the final grouping is 36-hole leader Yuka Saso, who bogeyed No. 18 to shoot 71 and drop one shot out of the lead. If she, or Ganne, pull out a win tomorrow, they will be the youngest winner in U.S. Women’s Open history.

“I’m already counting down the hours until I tee off again,” Ganne said.

Paul Azinger rebukes Brooks Koepka for Ryder Cup comments: If you don’t want in, drop out

Phil Mickelson reveals the secrets to Europe's Ryder Cup success (and how the U.S. can stop them)