‘This is like the best thing ever:’ Rory McIlroy loves Brooks-Bryson video 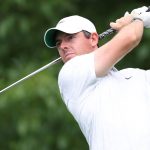 Rory McIlroy, two weeks ago this upcoming Tuesday, grabbed his phone and texted a co-worker. He had just seen a video that had started to go viral the night before, and you just don’t keep your thoughts to yourself on these kinds of things.

We’re paraphrasing here, but the text read something like this:

“I sent Brooks a message when it all came out,” McIlroy said Friday after his second round at the Memorial. “I said, I don’t care what happens to me for the rest of this week, this has made my week; this is like the best thing ever.”

To catch you up in case you haven’t seen the video: After his second round at the PGA Championship at the end of last month, Brooks Koepka began answering a question for Golf Channel, when 22 seconds into the 45-second video, Bryson DeChambeau walked by. Koepka shut his eyes for a couple of seconds, rolled them, shut them again, then unloaded, the latest addition in a two-year-long drama. The video had been previously unseen — until the Monday after the PGA, where it dropped on Twitter (where the original video has since been taken down). From there, memes were created, a song was written and opinions were given.

Including one now from McIlroy, playing in his first event since the PGA.

“Like it’s fine,” McIlroy said. “I think it’s good for guys to show personality, and pretty sure whoever leaked it from the Golf Channel got in trouble; I don’t know if anyone’s got to the bottom of that. But, hey, look, it is what it is, you’re not going to — there’s certainly people out here that don’t like me, I’m sure, and there’s a few people out here that I don’t like, and that’s, you know, but that’s —”

“That never gets aired,” a reporter continued.

“You never know, though,” a reporter said.

Before he left his interview, McIlroy was asked whether, over a 14-year career that has seen him win 28 times worldwide, he ever played with a chip on his shoulder.

“The only time I felt like I played with a chip on my shoulder, it wasn’t really a — it was sort of more when I was playing behind Phil [Mickelson] and Rickie [Fowler] at the PGA in Valhalla in 2014,” McIlroy said. “I saw them fist-bumping coming off the 11th green together, and it sort of felt like a two on one sort of. I was like, well, these guys sort of seem like they’re teaming up on me, so I’m like, you know, I’m not going to take that. And that sort of gave me a little bit of fire in my belly to go on and play the way I did.”

McIlroy would win the tournament. He’d beat Mickelson by a shot and Fowler by two.