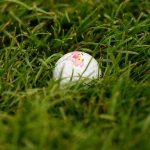 The thick rough at The Olympic Club's Lake Course will play a huge role in determining who wins this week's U.S. Women's Open.

This week’s setup at The Olympic Club for the U.S. Women’s Open is no different. As the players have gotten to know the course early this week, they’re learning that the Lake Course has some serious bite. The greens are small and the bunkers are deep, but perhaps the biggest defense is the rough.

“Really thick and long,” said two-time U.S. Women’s Open winner Inbee Park. “You have to hit the fairways on this golf course. It’s almost an automatic bogey when you go in the rough.”

History suggests that Park’s prediction may prove to be correct. The USGA has hosted five U.S. Opens on the Lake Course prior to this year, and just four players — total! — have finished the week under par. (This is the first U.S. Women’s Open here.)

Newly minted NCAA champion Rachel Heck got a taste of just how brutal the thick stuff can be on her very first hole of the week. Having played Olympic as a standout at nearby Stanford University, she expected she’d easily be able to chop her approach onto the green. The rough had other ideas.

“I thought, ‘Well, I’ll just hit a 5-iron,’ and I hit that 40 yards straight into the rough again,” Heck said. “The rough is so difficult. That will be, I think, the biggest challenge this week. It’s crazy.”

To add to the challenge of the rough, players will have to contend with razor-thin margins. While most courses have a secondary cut of rough and then a primary cut, there is no such comfort this week. Missing the fairways by even feet will be punished.

When playing a practice round Wednesday afternoon, Lydia Ko missed the 9th fairway by no more than a few yards. Even though she was just 140 yards from the flag, all she could muster was a choppy hybrid that got just a few feet off the ground.

“You have to be able to hit a lot of fairways,” Ko said. “[If you don’t], you just have to grip tight and hope for the best.”

But just because it’s tough doesn’t mean players aren’t thrilled to be at this historic venue. Even though there have been five U.S. Opens — and four other USGA events — hosted at Olympic, this is the first championship conducted on the women’s side.

“Venue is everything,” said 2010 winner Paula Creamer. “I believe that.”

When players step to the 1st tee on Thursday and start their 72-hole march to glory, the rough will be high, the greens quick, and the test will be stern. But that’s the point of a U.S. Open, right?

“Yeah, it’s going to be a difficult test,” Jessica Korda said. “But I’m really excited about it because this is exactly what a U.S. Open, in my head, always is supposed to look like.”