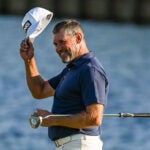 Lee Westwood tips his cap on Sunday after his birdie putt on the 18th hole at TPC Sawgrass.

Lee Westwood’s 14-foot, 9-inch birdie putt on the 18th hole at TPC Sawgrass dropped into the center of the cup, and Westwood wobbled toward the hole, lifted both arms in the air and sighed. One hole earlier during Sunday’s final round of the Players Championship, he had three-putted the island-green 17th, which put him two strokes behind Justin Thomas with one hole to play. By the time Westwood reached the 18th green, he could not win.

But a half-million dollars is no loss.

Westwood’s putt secured second place, which paid $1,635,000. He had entered the hole tied with Bryson DeChambeau and Brian Harman for second, and after DeChambeau lipped out an 18-footer for birdie, Westwood’s putt put $500,000 on the line.

“The week has been great,” Westwood said afterward. “I didn’t play my best golf today by any stretch of the imagination, but I battled it out. I was proud of myself for that. People question whether I can hole putts under pressure, and I rolled in a lot of must-make putts all day, really, whether it be for par or the great birdie on 14.

“Good par putts on 15 and 16 — I had a three-putt at 17, but it’s a tough two-putt up that hill, and then I rolled in one at the last, which is a little bit of justification for sticking with it.”

As Westwood and DeChambeau walked up to the 18th green for their birdie putts, these were the two- and one-putt scenarios:

— DeChambeau birdies the hole, and Westwood misses. In this case, just flip the totals of the two above.

On Monday and Tuesday, Westwood said he and his son, Sam, are playing Augusta National. With dad’s $500k, they can buy 333,333 $1.50 pimento cheese sandwiches and have a little change left over.