‘Good god, look at this:’ A pro and a football coach play Augusta from the tips 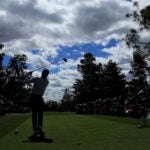 Kevin Kisner hits his tee shot on the 9th hole at Augusta National in 2016.

The 9th at Augusta National, from its back tees, is a dogleg-left, 460-yard par-4. According to the Masters website, the hole “is best known for its green that slopes from back to front. Players often drive down the right side to avoid having to contend with two left greenside bunkers on their second shots. The original ninth green had a more extreme ‘false front’ than the current green has. Shots landing there invariably rolled back down the fairway.”

Kirby Smart would worry about that much, much later.

“We get to the 9th hole and he’s like, ‘They want me to hit my drive in between those trees and that far? I got no chance,’” Kevin Kisner said on this week’s Georgia Bulldogs Pawdcast podcast. “And I’m like, ‘Yeah, no, man, it’s all good, don’t worry about it. The caddies will find the ball. We’ll be fine.’

“So he takes it back, and I swear to god on my life, he isn’t even halfway down in his downswing and he goes, ‘I got no business being back here.’”

Kisner has played Augusta during the Masters 18 times. The Georgia native has gotten on a few other times, too. A professional who’s won three times on Tour, hits it just under 290 yards off the tee and hits just over 70 percent of his fairways, he’ll play Augusta from its 7,475-yard tips.

A few years ago, Kisner talked the Georgia football coach into joining him.

Smart, Kisner said on the podcast, “plays golf like he coaches football.” “I mean, he’s yelling at that ball from the time he touches it until it goes in the hole the entire hole.” Smart may have won 66 games and four bowl games in five years at Georgia, but he’s never won on Tour. But the two, Kisner said, play all the time.

Smart and Kisner start their round.

“So we go along, he’s playing horrible, and every tee, you know, he’s like, ‘Good god, look at this. How do you even play this hole? Like I can’t even get to the fairway,’” Kisner said on the podcast.

And then they played the 9th.

'I want to hear it': What Justin Thomas needs from his swing-coach father