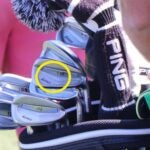 Lee Westwood didn’t emerge victorious in his battle with Bryson DeChambeau last week at the 2021 Arnold Palmer Invitational, but the 47-year-old did showcase that experience and reliable ball striking are still important in today’s distance-driven golf world. We can all learn a lot from Westwood’s steady, meticulous style of play on the golf course.

We can also learn from his unique equipment tweak, too.

Prior to last week’s competition at Bay Hill, Westwood put in a fresh set of Ping i210 irons. Westwood has been using those iron models for years, and as with his previous sets, he marks the back cavities with particular numbers using a Sharpie marker.

The numbers indicate the carry yardage that Westwood hits each iron. For example, in the photo above, he writes “177” on the back of his 7-iron to remind himself, and his caddie/fiancée Helen Storey, how far each club flies on average.

Admittedly, writing numbers in black Sharpie on your new irons may not be terribly pleasing to the eye, but it has a real function that can change your game for the better.

If you want to hit the ball closer to the hole more consistently, and avoid costly mistakes, it’s crucial to know your true yardages. The difference in one yard can mean you’re either dancing on the green with a birdie putt, or plugged in the lip of a bunker en route to a bogey. All too often, amateurs overestimate how far their irons actually fly, which causes them to either over swing leading to mishits, or they simply hit the ball woefully short.

Firstly, in order to write down the proper numbers on your irons, you have to know how far you actually carry each iron! Data tracking devices from companies like Trackman, Foresight Sports or Flightscope can help tremendously with figuring out your true yardages. If you don’t personally have access to a data-measuring device, surely your local golf pro or trusted fitter has one available.

Secondly, the numbers serve as a reality check as you pull the iron from your bag in preparation for each shot. If you’re 180 yards away with a bunker guarding the pin, and you go to pull your 7-iron that has “165” written on the back, maybe you’ll reconsider and go with the correct club. Of course, weather and grass conditions can make the ball fly shorter or longer than normal, but you need to at least know your average baseline numbers with each club in order to make proper adjustments.

Golf is complicated enough; don’t make it harder on yourself by playing a guessing game with how far you really hit each club. Know your carry distances, and either write them down on a notepad, commit them to memory, or take a page from Westwood’s book and write them directly onto your irons. That way, you won’t forget, especially when there’s trouble lurking ahead.