A 19-year-old made the U.S. Open cut. But that wasn’t the best part 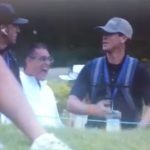 Akshay Bhatia's dad, Sonny (in white in the background), on Friday near the 18th green at Torrey Pines.

Akshay Bhatia, two years ago this September, wished his dad, Sonny, a happy birthday. Then he explained why it should be happy. Akshay posted two pictures to his Instagram account — one of Sonny holding a baby Akshay, the other of Sonny fixing Akshay’s tie during the 2019 Walker Cup. To the right, he wrote the following:

“I’d like to take a moment to wish my old man a Happy Birthday! I will never take for granted all of the things you had to sacrifice, and I wouldn’t be in this position if it wasn’t for you! Thank you so much for everything you have done. I love you Dad ❤️ #HappyBirthday”

Which brings us to Friday night.

Akshay, in his first U.S. Open, in his first major, was one stroke below the cutline with two holes to get above it. On the par-4 17th at Torrey Pines, he got up and down on a short-sided pitch right of the green. Good shot. Not good enough. That was a par. Needing a birdie on the par-5 18th to make the cut, Bhatia ran his second shot into the thick stuff over the green, then pitched to just over 3 feet.

“What a shot,” analyst Paul Azinger said on the Peacock online broadcast.

At this point, Bryson and Brooks were long gone. Rory McIlroy, Jon Rahm and Justin Thomas, too. As were most of the fans. Akshay was in the second-to-last group during the second round, and he was one of six golfers still on the course. But you won’t find a more earnest moment between dad and son than when he rolled in that 3-footer.

The younger Bhatia, to happy cheers, picked his ball out of the cup and doffed his cap. Near the green, the elder Bhatia sprinted 30 yards, skipped three times and yelled.

“Can you believe it?”

“That looks like a proud papa to me,” Azinger said on the broadcast.

“That looks like a parent,” announcer Dan Hicks said. “We don’t know for sure, but it sure had the celebration of one, didn’t it?”

“Didn’t it, though?” Azinger said.

“That wasn’t just some Akshay Bhatia fan,” Hicks said. “It was good stuff.”

As the 19-year-old Bhatia walked off the 18th on his way to the scorer’s tent, he gave a double fist pump toward the camera. A few minutes later, Akshay, Sonny and friends met up and hugged.

“And there is the Bhatia support team still celebrating Akshay making it into the weekend,” Hicks said on the broadcast. “You don’t think it means a lot to make it to the weekend at a U.S. Open? Great stuff.”