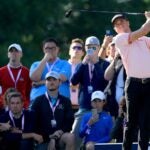 Justin Thomas hits his tee shot on Sunday on the second hole of a playoff with Will Zalatoris.

“Go ahead and be aggressive with the 3-wood.”

Major championships have these kinds of moments. The where-were-you-whens. You may not remember who won. But you can recite the hows. (And if you forget, the television folks put these shots on loop every time the next year’s tournament comes around.) Tiger and the chip-in. Jack and the arm-raise. Collin and the green drive.

This PGA Championship has two.

To begin, Justin Thomas and Jim “Bones” Mackay had options. One hole after matching Will Zalatoris with a birdie on the first hole of a three-hole playoff, player and caddie looked over what lay ahead now on the 17th at Southern Hills. For the second straight day, the PGA had bumped up the tees about 70 yards, to 302 total, and the field had a choose your own adventure — A) cover a creek, navigate three bunkers, and putt for eagle; B) don’t and dump the ball potentially somewhere unfriendly; C) don’t and layup, leaving an equally nasty approach.

Maybe an hour or so earlier, Thomas had found the front left sand, got up and down for a three and eventually reached overtime. Now, Bones was calling for boldness again.“Go ahead and be aggressive with the 3-wood.” As Thomas was listening, he held a 3-wood.

“I mean, the wind off the left with a 3-wood isn’t exactly my favorite, so I hit a beautiful shot in regulation in that bunker like we wanted to, and I just — I hit essentially the same shot, just had a little bit more cut on it,” Thomas said on CBS’ broadcast afterward.

Where-were-you-when-moment one. JT faded the 3-wood over the water and in between the front left and bunkers. His ball bounced about a yard in front of the green, rolled out to the left and finished about 35 feet away. The crowd cheered, Thomas and Mackay fist-bumped, and the player grabbed his putter.

Let’s go back to the tee box. Before the ball had even reached the bunkers, Thomas took a step to the left and club-twirled faster than you can say Wanamaker. If you felt warm watching it, that was the heat from the friction of 3-wood meeting Thomas’ fingers.

“Nailed that,” analyst Nick Faldo said on the broadcast. “What a golf shot.”

Five years ago, at the 2017 PGA Championship at Quail Hollow, Thomas also hit a tee shot on a 17th hole, he also club-twirled (though, in our opinion, Southern Hills’ was better) and the result clinched his first major championship.

Sunday, he won his second. Back at 17, Zalatoris hit his tee shot right of the right bunker, pitched on and two-putted for a four. Thomas took two putts for a three. One hole later, on the par-4 18th, they went par-par, and Thomas was your winner.

“For it to go up on the green was nice just to put a little bit of heat on Will,” Thomas said on CBS’ broadcast.

“But I like these 17th holes in the PGA Championship, so I’d like to keep making a habit of that.”