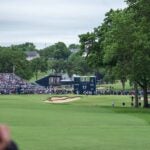 The gettable par-4 17th hole could prove to be pivotal on Sunday.

The long par-4 16th is playing .3 strokes over par for the week, making it the third-hardest hole on property, and the par-4 18th is even more daunting. Playing to an average of nearly .4 strokes over par, the behemoth of a hole has yielded almost as many double bogeys (12) as it has birdies (14) over the first three days.

Whoever leaves Tulsa with the Wanamaker Trophy in tow will have earned it.

But while Southern Hills’ finishing three-hole stretch is bookended by a pair of titans, there is a sliver of opportunity sandwiched in between. Enter the short, drivable par-4 17th.

The 17th represents a reprieve. Long-bombing tee shots aren’t a requirement at the penultimate hole. Rather, precision and touch will be the name of the game.

The scorecard lists 371 yards of turf between the tee and the putting surface at 17, but the actual yardage for the final round will be much lower. In Round 3, the PGA of America utilized a forward tee box, and that box is in play once again on Sunday.

The forward box at chops some 70 yards off the yardage, and with it adds the possibility for some late-round fireworks.

Take what we saw in Round 3, for example.

The forward box, plus a favorable northern wind, meant every player in the field could make a run at the green off the tee on Saturday. But the short yardage didn’t make hitting the green with a tee ball a sure bet — far from it, in fact. Of the 78 players who made a run at the green, just seven of them actually found the putting surface, and just three converted for eagle.

One of the men who carded eagle finds himself in the top five heading into Sunday. Cameron Young, a PGA Championship rookie, began to fall off the pace during his back nine in Round 3. And coming off a bogey at the 16th, he knew he needed something special to keep the leaders in sight. He pulled 4 wood on the 17th tee and took dead aim at the green. His ball came to rest 24 feet from the cup, and moments later, he rolled in his putt for eagle.

“The eagle came at a really nice time,” Young said. “Just to hit a solid shot there on 17 and kind of give yourself what should be a pretty easy birdie was momentum enough, and for that putt to go in is a huge bonus.”

Young is four back of Mito Pereira’s lead heading into the final round.

Like any good risk-reward hole, though, there is plenty of trouble lurking. Short of the green some 30 yards sits a meandering creek ready to gobble up any wayward drives. Beyond that, a trio of bunkers surround the kidney-bean shaped putting surface.

On Sunday, players will be once again be faced with the decision to either lay up or go for the green. And the execution could very well decide the championship.