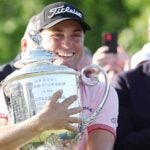 The winner of the PGA Championship will come away with a fat paycheck.

The 2022 PGA Championship purse increased significantly since last year, rising from a total of $12 million in 2021 to a whopping $15 million this year, bringing it on par with the Masters to share the highest purse total of all four major championships. (The Players Championship still owns the largest payout in golf for now, with a purse of $20 million this year.)

This year’s PGA champion will surpass the payout received by 2021 champion Phil Mickelson, who pocketed $2.16 million for his win at Kiawah Island’s Ocean Course, by an impressive $540,000, with a $2.7 million payday. The runner-up will receive a cool $1.62 million, and third place will clear seven figures too, with a payout of $1.02 million.

Even the players who missed the cut (of which there were 77) receive a payout of $4,000 each. So how much did the rest of the players in the field come away with this year? You can find a complete list of the 2022 PGA Championship payout for each player below.

How much money every player made at the PGA Championship