Justin Rose amazingly hits driver from inside a hazard 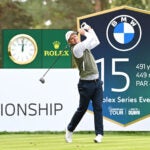 Justin Rose hits his tee shot on the 15th hole at the Wentworth Golf Club on Saturday.

The 15th hole at the Wentworth Golf Club in England, according to the narrator on the club’s YouTube page, is “one of the most difficult driving holes in all the golf I played.” To the left of the fairway is a bunker. To the left and right are dense trees. Starting to the right and finishing to the left is a winding stream.

“If ever you needed a good, clean, straight tee shot, this is it,” the narrator said.

Justin Rose’s tee shot was neither good, nor clean, nor straight.

His second shot on Saturday would be bad, dirty and diagonal.

“That kinda day!!” Rose wrote on Instagram next to pictures of his lie.

Rose’s drive on the 491-yard par-4 trickled onto the right upslope of the stream during the third round of the BMW PGA Championship. Rose would trickle onto the left upslope. He would play it. With his driver.

On his downswing, his left foot slid slightly. At impact, he stood up and leaned forward at about a 10 degree angle. As his ball went forward, he stepped downward into the dried-up stream.

Rose’s ball flew forward about 100 or so yards out of the hazard. He would not get up and down from there, and he bogeyed the hole.