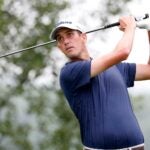 Chesson Hadley is moving on to the Northern Trust at Liberty National.

Justin Rose needed to make a putt of 5 feet, 4 inches to earn a trip to New Jersey and the first round of the FedEx Cup Playoffs. He missed, and he punched a ticket for Chesson Hadley instead.

The PGA Tour regular season came to an end on Sunday at the Wyndham Championship, meaning it was the final event for players to qualify for the postseason, which would also secure their PGA Tour cards for the 2021-22 season.

Hadley, age 34, was one of the pros battling to get to 125th or better in the FedEx Cup standings — or be sent to more qualifying events, where the competition continues (and intensifies) to earn a card. He started the day 132nd in the FedEx Cup but got hot early and shot an eight-under 62, which included a hole in one. Hadley, who started on the back nine, birdied three of his first four and made a hole-in-one — the first of his life — on 16.

He said he didn’t have number in mind to start the day. He just knew he had to go low.

“After I made that [ace] and got to five under on the day, I was like, I can do this. I made a nice birdie on the next hole and made a nice par save on 18 and I started to tighten up a little bit,” Hadley said. “I hit some good shots early on on the front nine, my back side, but didn’t get anything out of it. Nice par save on 4. You know, I finished strong with a couple birdies. You just, I don’t know, it will be close. I mean, it will be really, really close.”

When Hadley finished he had moved up to 126th, but that still meant he needed to improve by one spot or lose his PGA Tour card. Then Justin Rose came to the 18th hole, needing to clean up a five-footer on 18 to close his round. He missed, and with that three-putt Rose went from 115 to 126 in the standings. Hadley was in.

Rose is now out of the Playoffs, but he didn’t lose his card. He’s among several players who didn’t make the top 125 but still has a card for next season (or beyond) based off previous wins. But Hadley didn’t have the security.

“That’s kind of what the Playoffs is all about, right?” Rose said. “It’s a knife-edged moment. I’ve been on the winning side at East Lake where a bogey was costly and a birdie got me back into the projected No. 1 spot, so I’ve been on the right side of it and maybe on the wrong side today. Yeah, it’s not nice when it’s not in your hands, but obviously it was in my hands up 18. I didn’t do a very good job of that.”