‘It was difficult to have to ring him:’ Padraig Harrington explains not picking Justin Rose 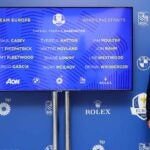 Padraig Harrington and his team for next week's Ryder Cup.

Sergio Garcia, Shane Lowry and Ian Poulter were in.

And Justin Rose and Alex Noren were out.

Padraig Harrington, with his three captain’s picks for the European Ryder Cup team, called Garcia, Lowry and Poulter on Sunday to fill out his team for next week’s event at Whistling Straits in Wisconsin. He’d call Rose, too.

“It was difficult to have to ring him,” Harrington said. “He played well enough to be on the team. He pushed hard at the end, but there wasn’t a spot ultimately.

“Alex Noren played great. Stats-wise, Alex Noren was right there. Fantastically suited to the golf course. So I don’t know if Alex knows how close he was to making the team. Really quality player. But it was tough ringing Justin, because that was the one right in the bubble. Clearly he’s good enough to be in the Ryder Cup. Clearly he’s a great player, showing some form right now.”

In the end, Harrington picked Garcia and Poulter — players, he said, he had “his heart set on” as being “the hearts of the team, the soul” — and Lowry, was in line for an automatic selection before last week’s BMW PGA Championship, the last qualifying event. Moving in at the BMW was Bernd Wiesberger, who Harrington said “delivered.” And that left out Rose, a five-time Ryder Cupper, and Noren, Harrington said.

“I talked to Justin a few weeks ago, and you know, he was very keen that he was going to work on his game, get his game ready, and look, he did,” Harrington said. “But ultimately, Bernd went in and stole his thunder and got in there and got that automatic position, which you know, in the end of the day, just there wasn’t enough room.

“That’s the tough thing with the picks. There is a point where — there’s not a huge deal of difference, either. It’s not like the three picks, while I’m happy with them and very comfortable with them, clearly people could have argued all the way for Justin, and as I said, Alex had exceptional stats coming into this. So yeah, there was other options on the table that we would have been happy with.”

On the other side, Steve Stricker had six automatic picks and six captain’s picks for the U.S. team. Harrington, besides the three captain’s picks, completed his team with four players off a European points list, and five from world points.

“No, we couldn’t have the same number of picks,” he said. “We have our European points list. We have to deal with players who — even you just look at Covid, who struggle to travel across the continent and can’t play all the events they want to play.

“Europe is in a distinctly different position. We are picking off different orders. In years gone by, we have been waiting for U.S. Tour events to finish picking our team. It’s a very complicated system in Europe that needs to be considered by each individual captain how he wants to do it, depending on the closing date of the event. Lots of little reasons.

“As I said at one stage during Covid, I was offered eight picks, and with eight picks, because it was very broad in Covid, we were thinking no golf for six months into the Ryder Cup, [and] you know, you might have 20 people, 20-plus people who might have a thought of making the team. That’s 730,000 combinations of teams you can make up out of that. More picks — it was tough making a pick. I had three picks, and it was tough leaving Justin Rose out. There’s always going to be somebody on the bubble.”