At noon on Thursday, PGA Tour Commissioner Jay Monahan sat at the front of a room full of golf media members and addressed the rapidly evolving coronavirus pandemic and its implications on golf.

“It goes without saying that this is an incredibly fluid and dynamic situation,” Monahan said. “We have been and are committed to being responsible, thoughtful and transparent with our decision process. With that as pretext, at this point in time, PGA Tour events — across all Tours — will currently proceed as scheduled but will do so without fans.”

The message was clear: golf would play on.

Twenty hours later — what feels a lifetime in the context of the breakneck pace of this situation — Monahan once again sat in front of the media. He looked tired Thursday. On Friday, he looked exhausted.

“We’re obviously incredibly disappointed to suspend the PGA Tour’s season for our players and our fans,” he said. “I’ve said all along, the health and safety of everyone associated with this organization is our No. 1 priority. We tried to be as thoughtful and measured as possible during this dynamic and challenging time. We took all the steps within our control and felt comfortable proceeding.”

In a sports landscape that has seen dramatic change over the last 48 hours, golf was the last domino to fall. The NBA was the first major U.S. sports league to take drastic measures when it suspended its season Wednesday night. The NHL and MLS followed suit the next morning. By late afternoon, the NCAA announced the cancelation of March Madness.

All of the sudden, golf stood alone. Until it didn’t.

Around 10 p.m. Thursday night, players received a text. The remainder of the Players Championship was canceled and there would be no golf through the Valero Texas Open.

BREAKING: Players have just received a text saying the Players Championship has been cancelled.

With a bevy of international players in the field, there were questions on their logistics. How would they reunite with their families with travel bans imposed by the President looming? And with the reported closures of Florida’s theme parks on the horizon, golf would be even more isolated than ever. 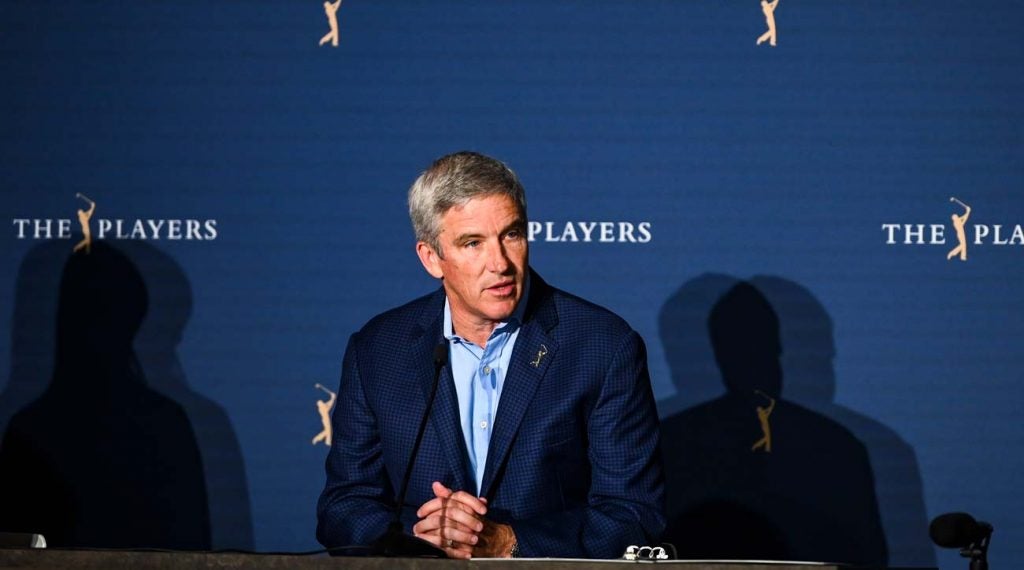 “And when you use doing the right thing as the litmus test, to me that was the final — those two things together were really the things that drove the decision,” Monahan said.

“You can justify it with the lack of physical contact and the space that you have around,” Jordan Spieth said.

“Selfishly, I’m glad that we’re able to still play,” he said. “This is a little different situation than other sports where we’re outdoors and we don’t have the physical contact and we can take it as cautious as we can.”

But not all players were on that nonchalant wavelength. C.T. Pan withdrew before the round began citing coronavirus concerns. And the always-outspoken Rory McIlroy didn’t hold back his thoughts, calling for every player to be tested for the COVID-19 virus.

News
Tour Confidential: What does a four-week (or longer) layoff mean for golf?

“All the Tour players and people that are involved need to get tested and make sure that no one’s got it,” McIlroy said. “Because obviously everyone knows you can have it and not have symptoms and pass it on to someone that’s more susceptible to getting very ill from it.”

How much of a role did these voices play in the decision to cancel? A lot, it turns out.

“That’s something that we took into consideration and took very seriously,” Monahan said.

Now, we wait. There are many uncertainties, but we do know this: Golf will not be played at least through the Masters. It’s a sobering thought that things can grind to a halt so quickly, but right now, it’s our reality.

On the day that sports stood still, golf tried to press on. But in the end, there was no other option.