How have we missed thee, PGA Tour? Let us count the ways 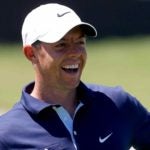 Rory McIlroy was a sight for sore eyes at Colonial on Wednesday.

FORT WORTH, Texas — What we’ve missed:

Players and caddies, going deep on some weighty subject, on the practice green as often as not. A Wednesday afternoon example: Bubba Watson and Cameron Champ’s man, Kurtis Kowaluk, talking about . . . trucks.

Or someone dishing new insight on some golfy thing. Here’s a snapshot of Mike Hulbert, former Tour player and longtime CBS secret weapon, mask around his mouth, talking to another old hand about the prospect of players losing balls this week, with no fans to stop errant shots or find them.

The PGA Tour does age gaps in ways other sports do not. It’s true every week, it’s always been true, it’s just been a while. When Tiger was a rookie, Ed Fiori was still on the scene. This week, there’s a new rookie, 22-year-old Viktor Hovland, who on Wednesday was getting his reps in in the vicinity of 50-year-old Jim Furyk. Whose chances do you like more over the course of 72 holes?

This next little scene has played before, hundreds of times, but now it is new again: players and teachers wandering the semi-familiar streets of another downtown, trying to find the local P.F. Chang’s. (400 Throckmorton.) Another one, in the same category of it’s-been-a-while: Phil Mickelson playing a practice round with Keegan Bradley, with Phil trying out some new thing, because Phil is always trying some new thing. Golf in reflective shades, Wednesday, High Noon. Look at Phil. See yourself.

Some funny little things we have not seen for three months: players with AirPods in their ears, gloves in their back pockets, cellphones in their bags, TrackMan units at their feet, tees in their mouths, Sharpies in their hands, top-10 finishes in their dreams. OK, some fine print, for you lawyers out there: Phil Mickelson is not dreaming of a top-10 finish. He has had enough of those for a lifetime. Even a win won’t change anything, really, except get Steve Stricker to look at him, come Ryder Cup time. Regarding Sharpies: autograph requests are far and few between here, but balls must be marked.

Also, in the broad category of good-to-be-back: caddie humor/caddie candor. Dave McNeilly, of Belfast, who caddies for Matt Wallace and who was already well-established when Seve, Lyle, Woosnam, Langer and Faldo were in their primes. In other words, he’s been around. He saw my hat, stenciled with 1854 and said, “A good year.” Dave caddied for Nick Price at the 1986 Masters when Price shot 63. Recently, Dave posted a video on social media in which he described the severity of his hangover during this historic round. That was Dave being funny. No, he was not hungover. Good to see Dave. Hadn’t seen him in . . . three months.

Colonial is the perfect course for this return to golf, this unexpected mid-year reunion. Colonial has been a Tour stop since ’46. It’s a neighborhood country club, with a big pool and tennis courts, in the middle of neighborhood, four miles from downtown. It’s tucked in, like Fenway. It’s such a pure golf environment. I first came here in ’86, as a caddie. I don’t think I’ve ever gone three months without being at a PGA Tour event since then, certainly not in season. The same, give or take, must be true for Jay Monahan, the Tour commissioner. I asked him to do some reporting of his own, what has his own Return to Golf been like.

He spoke of “pulling into Colonial Country Club, showing my credential, pulling into the parking lot.” In other words, everything old is new again.

He continued: “Walking on to the putting green, walking on to the first tee, walking on to the practice facility, seeing guys: players, caddies, members of our team that I haven’t seen in 90 days. I’ve missed everybody. I’m a person that thrives off of human connection and human interaction, looking people in the eye, seeing their emotion.”

He worked his way to the practice area and watched Bubba Watson play some bunker shots. They don’t play bunker shots the way we do. It’s like they’re talking to their ball, telling it what to do. You remember how that goes, don’t you? There won’t be fans at Colonial for this Charles Schwab Challenge, but at least it will be on TV.