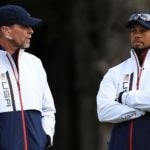 Steve Stricker and Tiger Woods were both vice captains on the 2016 U.S. Ryder Cup team.

Ryder Cup captain’s picks are always a hot topic of debate when the event rolls around every two years, and now that debate will be ratcheted up to the next level, especially for U.S. Captain Steve Stricker.

On Wednesday morning, Stricker and the PGA of America announced a revision to the selection criteria for the 2020 Ryder Cup, scheduled for Sept. 25-27 at Whistling Straits. Normally, eight players automatically qualify for the U.S. team through a points system based on recent performance on the PGA Tour. The final four spots on the team are selected by the captain, in consultation with his vice captains and players.

But according to the new criteria, Stricker’s captain’s picks will increase from four to six players. That means that he will personally select half of the team.

Changes were also announced for how the six automatic spots will be dished out. First of all, all Ryder Cup qualification points accrued in 2019 will still count, so no player will lose points as a result of the changes. In addition, players will be able to earn points from this week’s Charles Schwab Challenge through to the second FedEx Cup Playoff event, the BMW Championship, which is currently scheduled to end on August 30.

The revised selection criteria was a necessary fix in light of professional golf’s three-month shutdown from the Covid-19 pandemic, as Stricker noted in the press release.

“With all the various changes to the 2020 schedule, it quickly became apparent that we would need to amend our selection criteria,” Stricker said. “After many deliberate discussions, we collectively agreed that a smaller sampling of 2020 events — including just one major championship — would justify a one-week extension of the qualification window and an increase in the number of Captain’s selections from four to six. These changes were sparked by circumstance, but conceived with integrity in mind. In the end, we believe they will allow us to put our best team together to compete at Whistling Straits in September.”

Once the automatic spots are finalized, Stricker will announce his six captain’s picks on Sept. 2 or 3.

It’s unclear whether the increase in captain’s picks will make Stricker’s job harder or easier. Captains are often tortured with the decisions, and every Ryder Cup there are players left off the team that the captain and golf fans would like to see compete. Now Stricker will have two more spots to dish out.

It could be great news for fan favorites and Ryder Cup stalwarts who have dropped in the rankings in recent years, Phil Mickelson the biggest name among them. For Tiger Woods it’s a different story. He’s currently ranked 8th in the U.S. Ryder Cup standings, so in the old format he would have earned an automatic bid. If he fails to improve his position, he’ll have to rely on Stricker to give him a captain’s pick, though it’s highly unlikely his old friend would keep him off the team, no matter his ranking.

It’s still uncertain how Stricker’s counterpart, Padraig Harrington, will handle the European team’s qualifying system for 2020. The current Euro guidelines call for nine qualifiers and three picks (Harrginton did say in April, “I can tell you there is no scenario where I get 12 picks.”)

But the matter is certainly on European players’ minds.

“I think we’ve only played roughly about a third of the qualifying tournaments or the available qualifying points, which kind of compromises the European points list,” Ryder Cup stalwart Henrik Stenson said on a recent episode of his new Callaway Golf podcast, Henrik Stenson Almost An Hour.

“So is that something that will be looked at. Then are you going to have more picks, are you going to change something out depending on how this all plays out? Because you’ve also got the European players who are playing on the PGA Tour. If now the PGA Tour starts up, is it going to be (based on) world ranking, because the world ranking has been frozen. If those points start to accumulate, it’s obviously not fair for those guys who play Colonial that can earn points towards the qualification and guys who are back home in the U.K. cannot.”

The Europeans have won nine of the last 12 Ryder Cups dating to 1995.