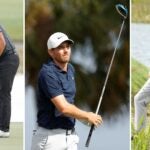 Aaron Wise leads the Honda Classic at the halfway mark.

We’ll forgive you if you skipped out on some of Friday’s live coverage at the Honda Classic in favor of another form of March Madness, but fear not! We’re here to catch you up on all things Bear Trap. Here’s what you need to know at the halfway mark from PGA National.

You could say this tournament has a Wise leader. Or you could skip the wordplay and focus on the play play, highlighting the fact that Wise opened 64-64 at one of the most difficult courses on the PGA Tour. He’s 12 under and three shots clear of the field at the Honda Classic’s halfway mark.

“It’s two great rounds of golf and I love that and I love that I’m playing good,” Wise said, trying not to get ahead of himself. “Like you said, this place can get to you pretty quick and there’s a lot of golf left ahead and a lot of trouble out there.”

Wise words, you might be thinking to yourself. Or you can just shake your head and move to the next section of this article.

Among the most fun stories from the peloton is that of Brandon Hagy, who was practicing at his home course in Arizona early in the week when he checked his all-important “number” for the week and found out he was second alternate. He booked a last-minute flight, didn’t get on site until Wednesday morning and wasn’t able to play a practice round in advance of the tournament. Friday, he posted a morning eight-under 62 that left him T2, three shots back.

“Maybe I’m feeling like I’m playing on a little bit of house money a little bit, so I kept it pretty loose out there,” Hagy said. “I just tried to have a good feeling for every shot and I am just kind of grateful for the opportunity.”

He’s certainly playing that way. Matt Jones opened with 61 and is tied with Hagy at nine under after an even-par second round. Sam Ryder shot 63 and sits one shot further back at eight under. Beyond that it gets crowded, with four players at seven under — including Shane Lowry:

Who made the cut?

The cut line fell at one over par, a number that Pat Perez reached late Friday afternoon with an eagle at No. 18. And while the Honda is notably absent the game’s biggest names, a bunch of the headliners will be here for the weekend.

Phil Mickelson shot 68 and sits one under.

Rickie Fowler shot 68 and sits two under. The only Koepka in the field — Brooks’ lesser-known brother Chase — is two under, too. The ageless Steve Stricker is three under. Defending champ Sungjae Im is four under, tied with Adam Scott. And Camilo Villegas shot a second-round 65 to hit the halfway mark at six under.

Who missed the cut?

A whole boatload (that’s equal to roughly 14) of golfers finished the week two over, including 50-year-old Jim Furyk, big-bombing Wyndham Clark and notorious 11-maker Ben An. Talented British trio Ian Poulter, Luke Donald and Matt Wallace were in the group at three over.

Further down the board was Padraig Harrington, who at 10 over fell some 13 shots behind fellow Ryder Cup captain Stricker. Henrik Stenson continues to search and shot 78-75. And Wesley Bryan turned in a particularly memorable 78 that included this trek into the mud:

Among the most interesting post-round comments on Friday came from Rickie Fowler, responding to Nick Faldo’s jab about the number of endorsement deals he has maintained despite his substandard play of late. Fowler kept things optimistic.

“I know where Nick was trying to come from on that and it’s like competitor to competitor, you’re trying to needle each other and get each other going type of thing. I am fortunate to have some great partners and make some great commercials and it’s been fun to be able to do that.” Fowler isn’t currently qualified for this year’s Masters but insisted he hasn’t given up hope of winning an event between now and then to punch his ticket.

“I would much rather be playing the week of the Masters than working,” he said. “But it’s all part of it. I’m going to keep kicking down the door, if we’re able to do something special in the next few weeks before Augusta, we’ll be there. If not, we’ll keep grinding and we’ll be back in the winner’s circle soon.”

On Thursday, PGA National played plenty tough; pros averaged 71.5 including a particularly punishing showing at the par-3 17th, which played to a stroke average of 3.57. On Friday, the wind dropped slightly and the course played to an average of 70.5. Interestingly, plenty of that scoring difference came on No. 17, which actually played under par at 2.85.

Winds are expected to pick up on the weekend and the greens will likely firm up, so if you came looking for torture at the Bear Trap, fear not: there’s plenty of chaos likely ahead.