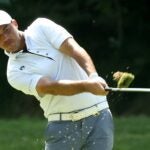 Chase Koepka at the Honda Classic on Thursday. After two rounds of 69, he will play the weekend.

PALM BEACH GARDENS, Fla. — Golf in South Florida in March can be a beautiful thing. The Koepka Brothers — creators of various hits including “Smackdown at Bethpage Black” and “Playoff at the 2017 Kazakhstan Open” — know all about it.

It’s not the golf courses, even though South Florida is loaded with golf courses and is famous for them. Most of the courses within 50 miles of here, public, resort and private, are flat and windswept and dotted with an annoying number of lakes and lagoons, the residue of all that dredging. For the most part, you have to play out of a cart. The brothers K have been doing that all their lives.

The thing that makes golf in March in South Florida is the wildly changing weather. One-hundred percent humidity one day; bone-dry air the next. I-wish-I-had-shorts one day; I-need-another-layer the next. The rain comes in, the rain goes away. The wind rises and falls.

And to this scene we drop in youngish Chase Koepka, playing his bottom off as Thursday afternoon turned into Thursday night, the last group on the course (PGA National) in the first round of the tournament (the Honda Classic). Chase, 27, was the runner-up in the 2017 Kazakhstan Open. Not widely observed, but it had to be something, and maybe clips of it will show up via Borat at some point. Chase’s brother, Brooks, 30, has won four major titles, the most recent of which was the 2019 PGA Championship at Bethpage Black.

Chase signed for 69, one under par, nearly 12 hours later. Given the conditions he played in, that was nearly as good.

“Sixty-one,” Chase said when he came in. “That’s gotta be a course record, right?”

Well, it ties it.

Chase knows what it’s like to shoot a low score on the PGA Tour. He shot 63 last year in the fourth round of the 3M Championship, where he tied for 26th. The Honda is the eighth Tour event of his life, including the two times he played with his brother in the New Orleans team event. There are just the two boys, no other siblings.

On Friday at Honda, no matter what Matt Jones was doing, Chase would be playing to make the cut — and he did, after another 69. There was a short burst of rain before his 9:26 tee time. The day was cooler, less windy, cloudy early and sunny later. A better day for scoring, to a degree.

A while back, Brooks was asked what Chase needed to make it on Tour. “More chances to play,” Brooks said. His good round on Friday will give Chase at least two more chances, and maybe more. On the PGA Tour, every time you play well you improve your status, in every sense of the word.

It’s not easy, having your status inexorably tied to the status of a sibling. The late Tommie Aaron, kid brother of the Henry, could have told us all about that. Henry Aaron was one of the great sluggers in baseball history, with a long and majestic career. Tommie spent his nine-year career trying to stay in the game and outhit his weight. Which he did. He was a career .229 hitter.

But he was also, and forever, Hank’s kid brother. Not easy. Mark Love, kid brother of Davis Love, knows this terrain. Davis used to say that Mark, for pure innate skill, was the more talented of the two. Davis is in the World Golf Hall of Fame. Mark has worked behind the scenes in Davis’s business life for decades.

Chase had a dozen or more friends and relatives in his gallery Thursday, including his father, Bob. Brooks had planned to play but has been on the DL since early March with a left-knee injury. He was offering play-by-play on his Twitter account.

Chase is playing the Honda on a sponsor’s exemption. You can figure out his path to the field yourself. In early 2013, Bob Koepka was wondering (to use the gentlest word possible) why Brooks was not offered a spot in the 2013 Honda, after playing and winning in Europe. Later that year, Brooks was offered an exemption into the PGA Championship and finished 70th. You build a career in golf as you build a score. With every shot and every round and every tournament.

Chase has a solid game. It is not like his brother’s. He’s about three inches shorter and 30 pounds lighter. There’s little curve on his shots. He looks to be solid through the bag. He’s not a basher. He brings to mind Mark Wilson, who won this event in 2007. Chase has been chasing his golfing dreams all over the world, including India and South Africa — and, yes, Kazakhstan — for the past half-decade. He’s been paying his dues.

“We have different games, but we’re able to help each other out,” Chase said after his first round. His caddie this week is Dan Gambill, a close friend of Brooks’s and the director of the Brooks Koepka Foundation. You couldn’t imagine a less presumptuous player-and-caddie team, engaging tournament volunteers and fans, plus the other players and caddies in their group, through the round. “I see things in Brooks’ game and he sees things in mine.” The biggest check Chase has ever made as a pro came in the team event, the Zurich, in 2017. He and Brooks together banked $280,000. Chase finished 43rd at the Estrella del Mar Open on the Latin American tour last year and made $823.

Maybe this will be the week he makes his career-best check. He’s certainly going to make more than $823; the smallest payout he’s now guaranteed to pocket is $15,050. Chase is looking to improve his status. He’s looking for more chances to play, in bigger tournaments, with bigger purses.

There’s one sure path to success in golf. Shoot lower scores. Chase spent 20 years chasing after his brother all over courses in South Florida, where they grew up. Brooks would go low, Chase would try to match him. Playing golf in South Florida — in the wind, around the lakes, often off coarse grass — is a particular skill set. Chase and Brooks both know all about it.

“We shared a bedroom as kids,” Chase said Thursday night. “We didn’t have a lot. We lived not far from here, in Wellington. We fought. We’d go at it. But we had a lot of good times, too. We were there for each other.”