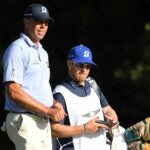 Matt Kuchar and John Wood at the 2020 Genesis Invitational.

At this week’s BMW Championship at Olympia Fields, Matt Kuchar has a familiar face on the bag, but it’s not his caddie of nearly five years, John Wood. Instead, it’s Kuchar’s wife, Sybi, who stepped in as a temporary replacement when Wood and Kuchar split up after the Wyndham Championship.

According to a Golf Channel report, Wood initiated the breakup after he and Kuchar missed the cut at the PGA Championship.

“John Wood called me after the week of Greensboro and said he was going to be done caddying, at least for me,” Kuchar told Golf Channel. “Said that he was going to look into some options with TV. And so I kind of had to piece together a couple caddies in the interim.”

The nature of the TV opportunities Kuchar mentioned are currently unknown, but as a longtime contributor to GOLF.com’s Tour Confidential, Wood’s value as an insightful commentator on the game is obvious.

Wood told GOLF.com via text message that he hasn’t made any decisions on his next move. He said transitioning into a new position in golf outside of caddying is a possibility, but that he’s also still open to continuing as a Tour caddie if another opportunity comes along.

Wood played college golf at UC-Berkeley and has caddied professionally for 19 years. Prior to working for Kuchar, Wood had stints with Hunter Mahan, Kevin Sutherland, Chris Riley and Mark Calcavecchia. Wood and Kuchar first began working together in 2015 and enjoyed several highlights together, including a bronze medal at the Olympics and a win at the Ryder Cup in 2016, and Kuchar’s Sony Open victory in 2019.

Once the new season begins this fall, Kuchar plans to have veteran looper Brian Reed on the bag, who previously worked for Kyle Stanley.