What PGA Tour player would you most want to trade golf clubs with? 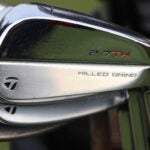 Which pro golfer has the most enviable bag setup?

PGA Tour players are better golfers than we are. That’s the hard truth. They also have access to custom, one-off equipment that most of us retail buyers don’t necessarily have access to, or the budget to buy.

Realistically, though, most amateur golfers wouldn’t even benefit from using the same exact clubs that PGA Tour players use. They swing fast and consistently, so they often play with unforgiving club heads equipped with super stiff shafts. Some of their clubs just look so cool, though!

PGA Tour players’ clubs have always been the envy of golf equipment aficionados, but the question is, which Tour player has the most enviable setup?

That question was recently posed during a Q&A episode of GOLF’s gear-focused Fully Equipped podcast: “If you could trade golf clubs with one PGA Tour player, who would it be?”

As co-host Kris McCormack rebutted, “I’m not fast enough to play any set configuration that’s out on Tour,” which is a fair point. Most golfers would benefit from using more forgiving options with softer shaft flexes, but hey, it’s a fun hypothetical rather than a realistic offer.

The most financially sound answer, of course, would be Tiger Woods. After all, he does have a putter that’s likely worth millions of dollars, but that’s a little too obvious. The more eclectic answers below are from the Fully Equipped co-hosts.

As you read our answers, think about it for yourself. If you could switch golf bags with a Tour player, who would you pick?

According to Wall, a fellow Texan, Scheffler’s bag is “a really good eclectic mix of gear, but a lot of those clubs are ones that people really want that maybe they can’t play. It’s a killer setup.”

No arguments here. Let’s breakdown what Scheffler has in the bag of late: OUR TAKE: Some drivers offer flashy distance, while others provide sturdy stability. Ping’s new G425 drivers, though, checked both boxes for our testers. In his first time hitting the Turbulator-crowned driver, one GOLF tester called the G425 “wife material” due to its speed and forgiveness. “All my mishits went straight,” another said. Players also found that the impact sound sings a deep, booming note.  THE DETAILS: By combining tech from previous releases, Ping says it was able to design its most forgiving driver ever with the G425 Max. No wonder why testers found its performance dependable. The G425 Max drivers measure a USGA limit 460cc and have a 26-gram adjustable tungsten in the back of the heads to help increase launch and forgiveness. For golfers with a slice, Ping offers the G425 SFT draw-biased option, and for higher-speed players who need reduced spin, Ping offers the G425 LST. Check out 150+ reviews from our gear experts in the ClubTest 2021 collection
Buy Now

McCormack, a right-handed golfer, already admitted he can’t play with any Tour equipment setup, so he might as well pick a guy with the opposite golfing dexterity.

Here’s what McCormack had to say about his choice: “I suck no matter how I swing it so it doesn’t matter what I have in the bag… [Mickelson] has a bag full of really cool proto stuff at any given time. He just likes the bag jewelry.”

That he does. Let’s check out what Lefty had in the bag in his most recent professional outing:

I’m a sucker for pro golfers who use older equipment, and Kuchar has a bunch of clubs in the bag that are 5+ years old. He told GOLF.com recently that he doesn’t switch into new product unless it’s truly better. I can’t help but respect the heck out of that mentality.

Kuchar was my first pick, so I’m sticking with it, but I did give a special shoutout to Tiger Woods’ 1997 Masters-winning setup and Anthony Kim’s setup circa 2007 on the podcast. Hopefully switching golf clubs with AK would come with one of his belt buckles, too.

Anyway, Kuchar’s club setup is listed below. For a super deep dive into his setup, and why I like it so much, check out the link here.

Note: He carries 16 clubs, but decides between a long iron, hybrid or extra wedge to get down to 14 clubs.