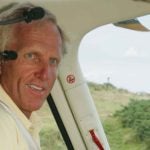 This is the second installment in a four-part Bamberger Briefly series in which Greg Norman offers his insights into various golf subjects. To read Part 1, Norman on Michael Jordan’s golf, click here.

HOBE SOUND, Fla. — Greg Norman was giving a tour recently of Medalist, the golf club he founded here with two others in the early 1990s, and he mentioned the helipad he had built on the sprawling property. It’s not active now but for years Norman used it regularly, and with relish.

In his golfing prime, nobody in the game made an entrance like Greg Norman. If you were at Doral and you heard the whirring blades of a chopper in descent, you knew Norman was 90 minutes from his tee time. Norman’s commute to work from home was 100 miles and he could make the trip, often serving as his own pilot, in a half-hour or so. Your Nick Prices, your Raymond Floyds and your Payne Stewarts, in player dining or maybe on the range, knew he was coming in, too. Was it excessive? Of course! Did it add to the fun? It did.

I asked Norman about the January helicopter crash in Los Angeles that killed all nine people aboard, Kobe Bryant and his daughter, Gianna, among them. I asked Norman if he had any insight, from his own experience as a helicopter pilot, and as an elite athlete who has flown often in helicopters as a passenger, into the tragedy.

“Yes — yes,” he said. His voice was sober. “Probably pilot error and pressure from the back,” Norman said. Norman could imagine the legendary basketball player saying, “‘Get me through this; get me there. I’ve got to get my daughter to this game.’

“My instructor and I had a saying, ‘If you can’t see through it don’t fly through it.’ If I was flying to Doral or Orlando or Naples and there was fog, we just put it down and waited it out.

But he knows what we all know, that all travel comes with risk.

“My instructor and I had a saying, ‘If you can’t see through it don’t fly through it.’”

After a pause, Norman told an amusing story of flying in his helicopter to Naples, on Florida’s west coast, with a co-pilot and several passengers.

“There was a drought then and I saw the biggest alligator I’ve ever seen in the United States, probably a 14-footer, going from one pond to another, so I had to get close to get a better look,” Norman said.

This helicopter story was bound to have a happy ending but you knew you had to get through a scary middle first.

Norman got close to terra firma and that triggered the chopper’s landing apparatus gear, to engage and lower. Suddenly Norman’s helicopter was much closer to that alligator than he had ever intended it to be. The ‘gator must have thought it was prehistoric times again and a giant pterodactyl was swooping in for a meal.

“This ‘gator leaps up, this 1,000-pound animal, and had he held on we would have been done,” Norman said. He could imagine the crash landing. It might not have been fatal but it would have been bad. “Now that was a lesson in stupidity.”

Norman has a thousand of them, stories and their lessons. He’s around to tell them, and no doubt his collection is growing.